When you have in mind to wear classic but trendy outerwear that keeps you cozy and protected in all weather, without being overwhelming, the first thing that comes to mind is a Trench coat. It is a timeless style that can give you distinction from the crowd. In this coat, you look sophisticated and elegant standing in the rain – that is no mean feat. 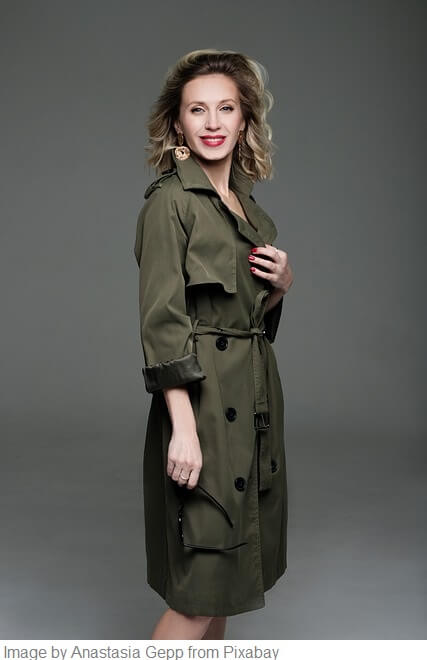 A trench coat usually has these features:

Which Style of Trench Coat is for you?

Though most of the features of trench coat remain the same for all the varieties available what you can choose are the length, color, and whether you want the double-breasted style or the single-breasted style.

There is one thing I will say about choosing the best style for you – find one which fits across the shoulders. Oversized trench coat is out of fashion and it may also overwhelm you. It should just have enough room to go over your regular clothes. Another important thing is to belt the trench coat on the narrowest part of your body – ie if you choose to belt it or tie it.

The name ‘Trench coat’ itself indicates the origin of this particular piece of clothing. It has its roots in the trenches used in World War 1 to keep the soldiers hidden. When war changed its strategy from open fields to deeply hidden trenches with the advent of longer-range weaponry, the coats needed to protect the British soldiers from rain, as well as keep them warm in there.

The new coats, which came to be known later as trench coats, were lighter and more breathable than their predecessors. Trench warfare also introduced neutral-colored, better-camouflaged coats. Brands Aquascutum and Burberry, both take credit for the introduction of the trench coat. They both had strong liaisons with the military establishment. So Burberry and Aquascutum’s early wrapper coat designs converted into modern-day trench coats as a result of military and war strategies over time.

In the 1820s, Macintosh rubberized cotton coats were used as outerwear by men while they rode, hunted, went fishing, and for military purposes. Though they protected the wearer from rains, the garment was not breathable, was sweaty, and hence produced a stench characteristic to it. That’s why garment manufacturers started looking for alternatives that were breathable, odorless, and water repellent. As scientific inventions improved and technology evolved, better versions of water-resistant textiles came into the market. In 1853, John Emary, couture, developed a more water repellent and less stinky garment, or to be specific “wet wear”, for the gentry. He produced it under his company’s name “Aquascutum”. Aqua meant water and scutum meant to shield. In 1853, Thomas Burberry, a young clothier from Hampshire invented a twill fabric called “gabardine”. In his fabric, he coated or weatherproofed individual strands of cotton or wool fibers. This made it water-resistant and breathable. Burberry’s gabardine coats found popularity like Aquascutum among the upper-class gentry who liked outdoor activities. It was favored by explorers, aviators, and adventurers.

Trench coats by Aquascutum and Burberry were expensive, affordable only to upper-class army officers. It was more like a statement worn by the officers. The officer’s trench coat was double-breasted. Like their uniform, it was tailored to the waist and flared to a wide mid-thigh skirt that allowed easy movement. Mid-thigh length had its advantage for it never got trailed in the muddy waters of the trench. The belt at the waist came with rings to hang the sword, pistol, binoculars, etc. Even after the First World War, the trench coat remained in popularity and came into high demand by the military during Second World War.

Hollywood films of that era also showed heroes and heroines in trench coats. One cannot forget Audrey Hepburn in her stylish trench coat in Breakfast at Tiffany’s, Humphrey Bogart wearing it in Casablanca, or Meryl Streep in a Burberry Trench coat in Kramer Vs. Kramer. I love the trench coat worn by Keanu Reeves in The Matrix, not just because I love the actor but because of the elegance this coat gave him.

When the trench coat was popularized in Hollywood, it automatically paved its way into the fashion world. Fashion designers played with this iconic design and designed them in various colors, bright as well as subdued, in different fabrics like satin, suede, and with a variety of sleeve styles.

Today, It is mostly made of weatherproof cotton gabardine or leather. And the colors are no longer limited to khaki or navy. But many of the distinguishing features of trench coats remain the same, as it was during the period it was created.

The Trench coat is one of the must-have outerwear for many. From the Royal family to businessmen to film stars, it has been worn by men and women in all social circles. It is a favorite with fashion influencers around the world. Meghan Markle, Duchess of Sussex wore one to her visit to Melbourne.