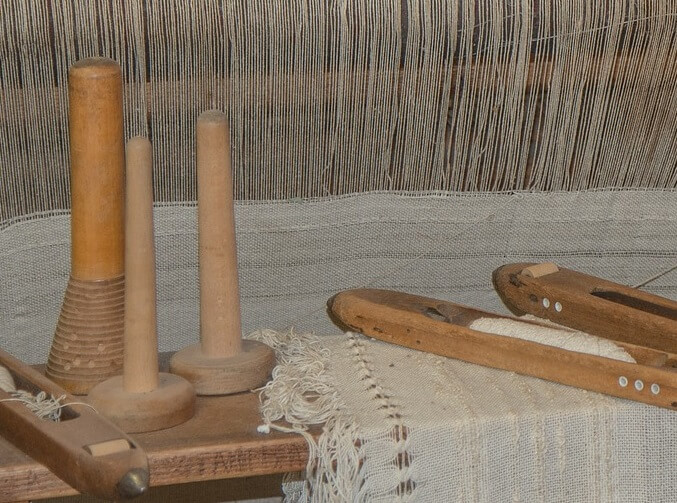 Pirn is a reel on which the weft thread is wound for weaving. It is an integral part of weaving fabrics. The pirn is a long and thin rode made of wood or plastic but its dimension is fixed by the dimensions of the shuttle it is placed in. The weft is wound on the pirn using pirn winding machines or quillers.

There are three kinds of pirns: plain tapered, full base, and partly formed base. All the pirns use the same kind of winding process. Weft can be of silk, cotton, wool, and synthetic fibers.

Winding of thread on a Pirn

An important and successful part of weaving is how the weft is wound to the pirn. There are hand-operated and electrical/automatic winding machines with spindles to fill the pirn.

Care should be taken at winding the weft on the pirn to ensure the free flow of the thread.

The winding process is started at the conical base of the pirn, filling it a little at a time while maintaining uniform tension and slowly proceeds towards the tip giving it a wedge shape. Thus, it avoids the ballooning effect usually associated with bobbins and reduces slough offs.

Once the pirn is filled, it is replaced on the spindle by the next empty pirn. This allows uninterrupted filling. Pirns have definitely improved the weaving time. A good number of filled pirns assure uninterrupted work and no wastage of time.

Difference between Pirn, Shuttle, and Bobbin

The pirns and bobbins are used to wound thread or weft and use it in a shuttle to aid in weaving. The pirns are similar to bobbins in function but differ in shape and execution.

The weft on bobbins is wound evenly from end to end. But in pirns, it is not so. It is wound in a tapered fashion. So, while the bobbin is a uniformly shaped rod, the pirn is shaped tapered at one end.