The term ‘Ancient Egypt’ is used to refer to Egypt from the period between 3000 BC to 330 BC. A great civilization flourished on the banks of the fertile Nile River.

We have learned a lot about ancient Egypt from the hieroglyphs with picture words and cloth remnants recovered from the Egyptian tombs of the Royals. Most clothes found inside the tombs like kilts, tunics, shirts, socks, gloves, headdresses, caps, and scarves have taught us many things about the dressing styles of these people.

The general impression that we get from the hieroglyphs is that Egyptian men and women are tall and lean with good physiques. The men and women liked to decorate their bodies with cosmetics and jewelry, other than fine clothes. But the clothes were fairly simple in style. 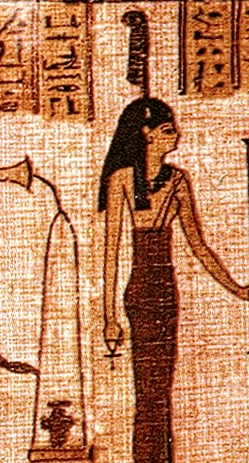 Women wore long tunics. Sometimes a second robe with wide sleeves and a band under the bust was worn over this.

The ancient Egyptian men left their torso bare or wore a tunic with a skirt. The working-class men on the other hand, wore a loincloth that just covered their private parts.

Many characteristic features of Ancient Egypt remained mostly unchanged for a long time in all aspects, and this can be said about fashion too. Many styles of clothing lasted for centuries.

Most of the information about the clothing in Ancient Egypt has been gained from the writings of Herodotus and from drawings found on the tombs. But these drawings may not be an accurate study of the actual clothing as they may be stylized representations of the actual scenario. 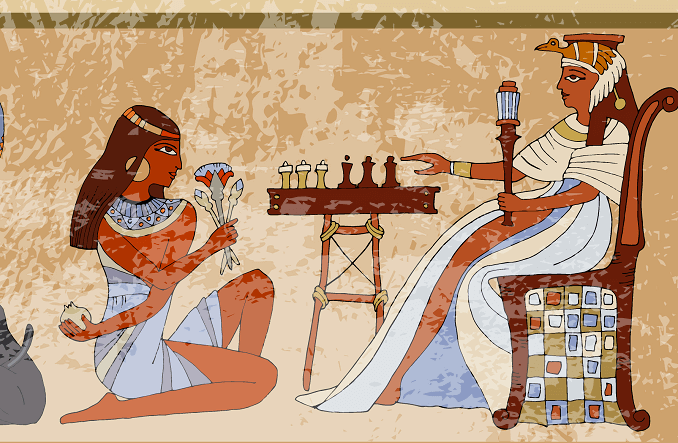 This tubular formfitting tunic reached the ankles and was hung from the shoulders by straps or attached to a wide collar for the women. Instead of the breastbone, it was girded at the hips for men. The garment was often sleeveless, but later a left sleeve wad was added to it.

Kalaris is basically one piece of fabric folded in the middle with a slit or round opening for the neck and sewn at sides up to the armpit. It was worn by stepping into it and pulling it up. It was belted with gathers in the front. In later periods, a much finer and transparent kalasaris was worn over the first.

The robe was mainly ungirded and had a slit down the front to wear over the head. The sides were sewn, leaving two armholes for the hands. Sometimes, the robe was girded by wide a sash around the hips. The women wore this robe girded by a narrow girdle under the breastbone. These robes were worn pleated or draped in later periods. The women also wore capes or shawls.

In the pictures of Egyptian people, the robes are depicted as being very tight, but this may not be true as sewing skills were not as advanced at that time – it would probably be quite loose. 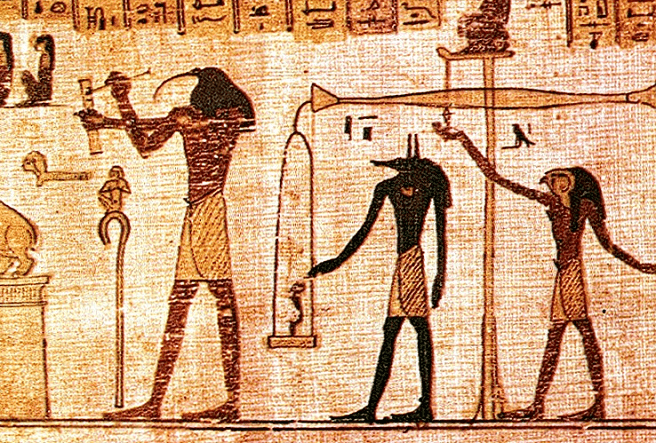 Men of Ancient Egypt wore a short loincloth that looked like a skirt or a kilt called a schenti; it was tied around the waist and reached to the knees.

The length of these skirts varied and changed through the different dynasties. In the old kingdom, the skirts were short in length, but it was long till the calf in the Middle kingdom. The schenti was worn with a tunic, long robe, or bare-chested.

Sometimes the men wore two skirts. The outer skirt often covered only the rear of the body, leaving the front part open. The front was covered with a long fringed underskirt.

The schenti was sometimes pleated and gathered at the front. This was the common attire for the Pharaohs and the wealthy. In later periods, the working-class also started wearing the skirt, and it reached only till their mid-thigh.

The clothing and the fabric used to make them were influenced by the weather conditions prevalent there. Egyptians dressed to suit the warm weather in fabric made from natural fibers like linen and at times, cotton.  Linen remnants dating back to 3000 BC have been recovered from the tomb of an Egyptian mummy. You can read more about this here.

There was not much difference between the dress worn by the nobles and common men. More than the style, it was the material that differed. The wealthy wore finer, sometimes even transparent linen, while the common man wore much coarser material.

The clothes were made mostly of linen which they obtained from the flax grown along the riverbanks of the Nile. The flax was harvested and soaked in water to make it soft. This softened flax was separated into fibers. The fibers were spun and later woven and sewn to make linen clothes. The earliest clothing was made of thick woven linen. But in the later periods, we saw them getting finer and finer to the extent of becoming almost transparent.

The Egyptians knew how to make clothes out of wool. But they did not wear wool much because it was considered taboo to wear it, especially to temples. Neither the priests nor the worshippers wore wool. The wealthy and the noblemen sometimes wore leopard skin. The Pharaohs wore a lion’s tail hanging from the girdle. The capes or shawls were worn from the earliest time. Some remnants of silk have been discovered from the tomb of a female mummy, but it may have been imported from China and not prevalently used.

Even though they used colors, white was the most revered and sacred color. Therefore, they preferred to use linen in its natural state, which was off-white. The common colors they used were blue, green, red, yellow, and black. The colors had symbolic meanings. White represented purity. The blue color represented Amon, the god of wind (color of sky, invisibility). The yellow color symbolized gold. The red represented violence. The green color symbolized life and youth. The color black was reserved for wigs.

The fabrics used for clothing often had woven or printed patterns. They also used embroidery, beads, and jewels to decorate their clothes, especially headdresses, collars, and girdles.

Read all works of Sir Gardener Wilkinson, an expert in Egyptology, the modern science devoted to the study of ancient Egypt.

Treatices by Herodotus the father of History, based on his experiences in Ancient Egypt.

Picture and timeline of Ancient Egypt can be found here : https://www.ucl.ac.uk/museums-static/digitalegypt// ; Egyptian museum