What is bias tape? Different types of binding tapes 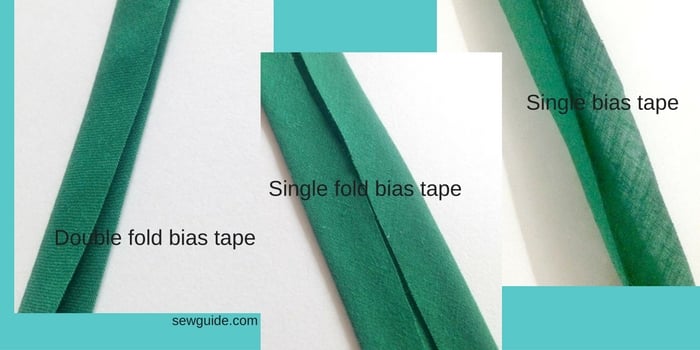 A bias tape is a fabric strip cut diagonally on the fabric at an angle of 45° to the selvedge.

The fabric strip is cut on the bias to bring stretch and flexibility to woven fabrics. The bias binding tape has this stretch, giving it great versatility in sewing. It doesnot fray at the cut edges.

Bias tapes are used for binding fabric edges. It is especially useful in binding curved edges because of the stretch – they confirm and adjusts neatly to curves.

Necklines, hems, armholes, cut fabric edges are all bound with bias tapes. It is also used to bind quilts and other decorating projects. 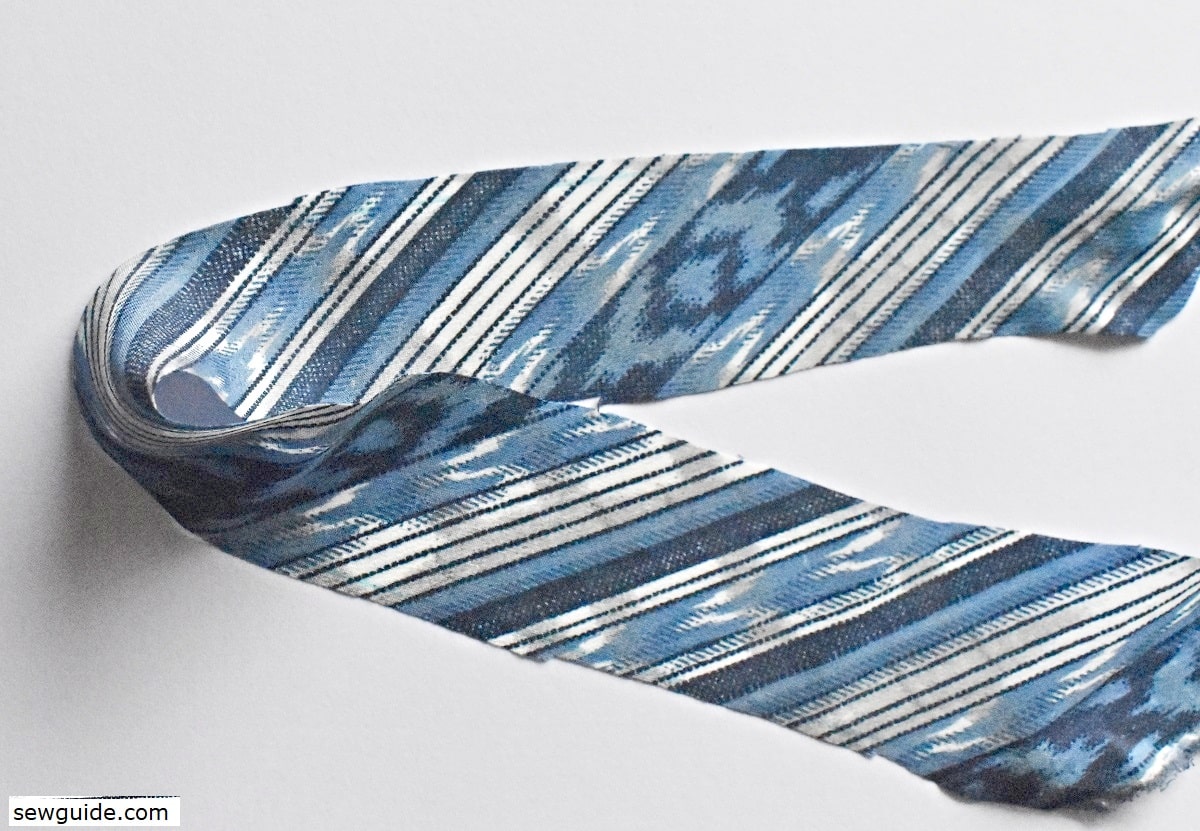 Double folded bias tape is the most common bias-binding tape. It is a bias binding strip folded twice to the inside. It usually measure 1/2 inch or 1/4 inch when finished.

The 1/4 inch double bias tape is basically a single fold bias tape with a fold in the center. It has the same two folds along the long edges as does single fold, but the double fold tape has an additional fold that is slightly off center, making one side a little wider than the other.

Double fold bias tape is often used to encase a raw edge. In this case, the tape will show when the garment is finished. You can also use it as spaghetti strap, drawstring cord.

First, the edges are folded to the inside.

And then, the tape is folded by the middle to get the double-folded bias binding tape.

Usually, bias cut fabric strips of different widths are cut out to make bias tapes of widths 6.5 mm (1/4 inch) to 38 mm (1 1/2 inches). The wider 38 mm binding is usually apt for quilts and bedspreads. Smaller binding is used for garment edges like that of baby frocks etc.

These are available as prepackaged, usually in lengths of 3 yards and upwards. Usually, it is available in 1/2 inch widths, i.e. the total fabric strip will be 2 inches wide but when it is folded, the finished width is 1/2 inch.

A single fold bias tape is strip of bias cut fabric which is folded in the center and pressed. I use this for binding the armholes. The edges of the bias tape are stitched to the edge of the garment and turned to the wrong side. It is then stitched there by hand or by sewing machine.

This bias binding tape consists of a fabric strip folded just by the middle. This tape can be used to bind without bulk.

This consists of a fabric strip with the side edges folded to the inside to the back.

Single fold bias tape has both raw edges folded inside. It has a single fold running along each long edge of the tape. In general, single fold bias tape is used to finish neckline and armhole edges when the tape will be stitched in place, (RIGHT SIDES together) and then turned to the inside of the garment and stitched in place again. The tape never shows on the outside (RIGHT SIDE) of the garment. 1/2 inch and 1″ are most commonly available in stores.

This is used to make casings or as a decorative trim. You can just keep it face up and sew along the edges.

This is a thin bias tape used under shirring, so that elastic thread is not exposed to the skin.

This is a strip of fusible interfacing cut on the bias. This tape can be used to stabilize bias areas of a garment, like a neckline, armhole, etc., with some stretch.

This binding, as the name suggests, has a gathered edge. It is usually used along the edges of blankets/ quilts, baby clothes, bibs, etc.