Fashion in the 17th Century

Fashion in Europe in the 17th century can be divided into two styles of dressing  – excessive and ornate dressing style of the Cavaliers who were a majority in England, France, Spain, and Italy and the simple yet elegant way of dressing style of  the Roundheads and almost spartan way of dressing of Puritans of Protestant countries of England, Scotland, Germany, and Flanders. King Louis XIV of France (1643–1715) and King Charles I of England (1600-1649) were two major fashion influencers of the century.

Sixteenth-century was influenced more by the rigidity of Spanish fashion, but the French influence in the fashion of Europe brought a more unrestricted sense of style. In 1633 there was even an edict (By Louis XIII,King of France and Navarra 1610–1643) against decorated lace-trimmed or embroidered dresses.  But during the rule of the French King Louis XIV (1643 to 1715) there was a renaissance of ostentatious dressing style in the whole of Europe including Britain. King Louis XIV wanted to set an example for his court to follow and always dressed impeccably. His court vied with each other to imitate the King and dress fashionably during the court sessions and also during the lavish balls that the King hosted. They dressed in sumptuous fabrics and adorned themselves with carefully selected accessories.

The King Louis XIV succeeded in making France one of the major producers of luxury goods. France became famous for exporting fine materials of silk, lace, brocade, and the like.

In England, fashion saw two extents – one led by King Charles I and his Cavaliers and the other by Roundheads (supporters of the Parliament of England during the English Civil War (1642–1651)).

The Cavaliers dressed lavishly in an ornate fashion, whereas Roundheads dressed in sober yet rich clothes which were impeccably styled and stitched. In fact, the Roundheads are given credit for introducing justacorps (a long knee length coat for men) and waistcoats. The puritans were an extreme group of Roundheads who rejected any excessive personal display.

Fashion flourished among the noblemen as well as the middle-class merchants, doctors, shopkeepers, lawyers, and other skilled people who had become financially comfortable enough to spend money on clothes, unlike the previous centuries. They tried to imitate the fashions set by the noblemen; the noblemen strived to bring continuous changes to their clothing styles so that they would stand apart from the wealthy middle class. Though the rulers passed sumptuary laws to bring some boundaries, they were seldom followed.

Men’s clothing in the 17th century 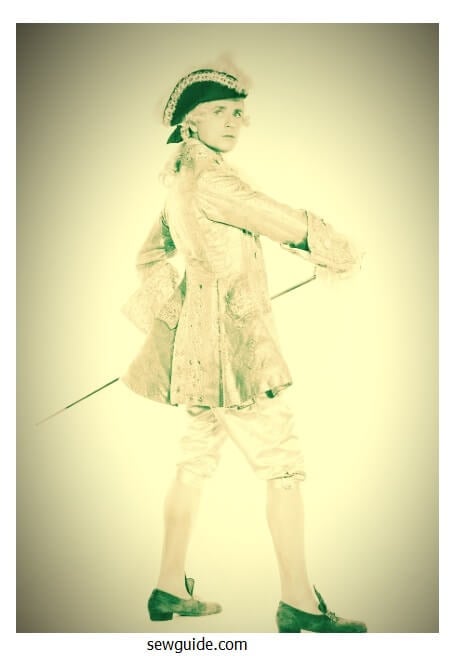 Men wore linen shirts with deep cuffs and fuller sleeves as the innermost layer. The beginning of the century saw men wearing rigid and close-fitting doublets with tight sleeves. But after the first decade, the waistline started to rise and doublets were often slashed to show the shirt worn underneath. The sleeves of the doublets became fuller and often the upper sleeves were slashed to show the shirt sleeves. During the 1640s the doublet became full and loose and was open at the front below the high waist to show the shirt under it. The 1650s and early 1660s saw doublets becoming very short, reaching the bottom of the rib cage. They were worn open or buttoned up in the front. The later part of the 1660s saw an introduction of a rather loose and baggy coat. This coat eventually replaced doublets in the coming years. In the 1670s a vest or a waistcoat made of luxurious and contrasting fabric was worn under the coat.

By the 1670s and 80s, the coat became more fitted and the waist much wider. The waist could have lapels or no lapels. This kind of long coat was called a justacorp. The coat also had pockets on each side that were arranged horizontally or vertically.

Another important change was the replacement of ruff by broad lace, bands, or linen collars. The bands were of two types: the standing and falling bands. The standing band was stiffened with starch and stood up and flared away from the neck. The falling bands were made of silk or linen and were often draped over the shoulders, chest, and back.

By the 1660s, cravats and jabots made their appearance. Cravats were made of silk, linen, or lace and were tied around the throat, and the ends arranged en rosette hung gracefully on the chest. The jabots on the other hand was made of cambric or lace edging attached to the front opening of a man’s shirt. It would be partially visible through the vest or waistcoat worn over the shirt. 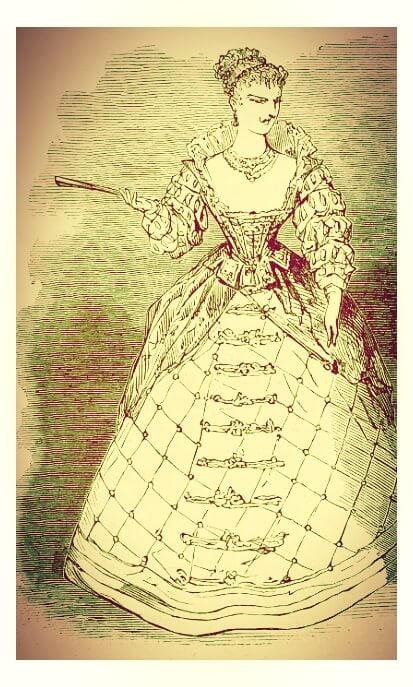 The women of the seventeenth century continued to wear gowns. The first decade of the century saw women in tight and rigid bodices and puffy and full sleeves. The skirts were supported on farthingale or hoop and bustle. The necklines were high or low in rounded or square shape. Ruffs continued to be part of the gown.

The seventeenth-century gowns were made of satin, velvet, brocade, or silk. Though gowns were embroidered and had trimmings and ribbons, they were less ornate than in the sixteenth century.

But by the 1620s, the sleeves began to shorten. At first, they revealed the wrists and were soon followed to reveal till the elbows. The 1630s saw stomachers becoming less rigid and bodices following the body’s natural contours. The waistline rose steadily by the 1630s.

After the mid-century, the waistlines started to drop again. The body was heavily corseted and stomachers (an embellished V-shaped piece of cloth, worn over corsets) became more rigid. The necklines also changed to low, broad necklines with dropped shoulders. The sleeves became tighter and ended just below the elbow. The gowns were designed to give the wearer an elongated and slim profile.

The farthingale, a hoop skirt that made the lower part look very wide, was very popular among the noblewomen in Europe during the early part of the 17th century

By 1665, in place of farthingale, petticoats became more popular. Sometimes several petticoats were worn under the skirt. The skirts were either closed or opened to show heavily embroidered petticoats worn underneath. The closed skirts were sometimes looped up to show the petticoats under it.

By the 1680s, the outer skirts were pulled up at the front and sides – this style is achieved with the help of a special type of jacket-like bodice called mantua. It consisted of a loose bodice with an overskirt with a long train. The folds of the overskirt were fastened in bunches or flowing billows to reveal the decorative petticoats (underskirt). The outer skirt had long trains in the back, most often made in silk. The mantua had a high square neckline in contrast to the previous rounded off-shoulder fashion.

You can find more detailed explanations on the clothing of the period in the book : Handbook of English Costume in the 17th Century by C. Willett Cunnington & Phyllis Cunnington. You can find more books in this post on vintage costume books. Read more on mantua here