The 19th century was a period in which political and cultural changes powerfully reflected in the styles and silhouettes of the clothing for women. This is also the period which is referred as the Victorian era (the period of Queen Victoria’s reign, from 1837 to 1901).

During this period, there was rapid advancement in transportation and business activities. The French revolution of 1789 brought many changes into the new century, but it didn’t end the leadership of France in the arena of fashion. The fashion industry expanded to cater to the nobility as well as the wives of wealthy businessmen, and actresses.

Fashion magazines, exhibitions, etc brought fashion to the masses. By the middle of the 19th century, the paper tax was removed, which sparked an increase in publications, particularly magazines targeted toward women. Magazines first started introducing new paper patterns around this time. The popularity of paper patterns and the expansion of women’s fashion publications promoted dressmaking at home.

Main clothing styles fashionable among women in the 19th century

During the first few years, the century after the french revolution, simplicity was valued in place of the extravagance of the previous century.

This is a simple tubular dress with a high waistline in transparent white cotton fabric. The fabrics chosen for this dress made it see-through. Women’s clothing revealed the true shape of the body as opposed to an exaggerated silhouette presented with the corset and pannier in the 18th century. These gowns had deep plunging necklines and large exaggerated sleeves (gigot sleeves, leg of mutton sleeves)

These shawls were draped around the shoulders to counter the thinness of the diaphanous chemise dress. 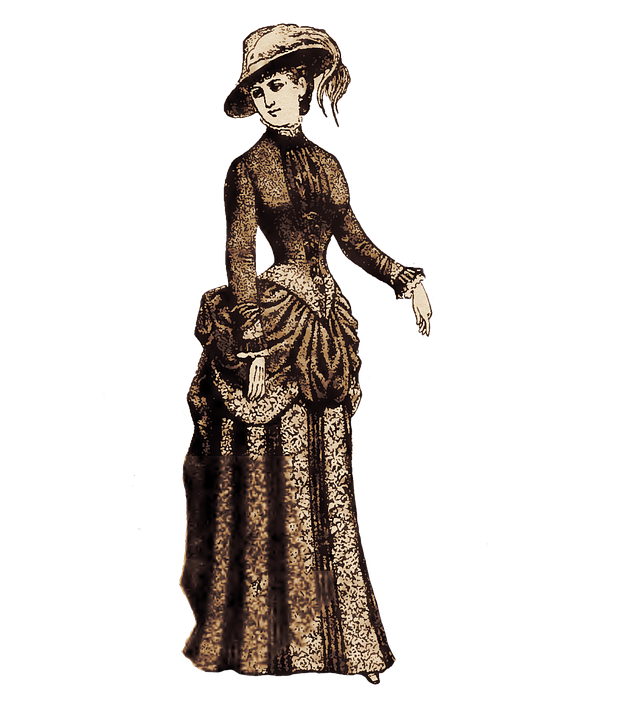 By the 1820s the clothing styles changed drastically. With the ascendence of Napoleon in France, the trend for simple clothes vanished. Empress Josephine dressed in exquisitely designed gowns and the nobility of the whole of Europe followed suit.

The waistline deepened and moved back toward its normal position by the 1820s. As the natural waistline started to show again, the bodice needed to fit more closely while the skirt expanded and took on a bell-shaped form.

Necklines were raised. The length of the full gowns was shortened to ankle length. To support the full skirts, women wore multiple layers of petticoats with frilled hems. The skirts of the gowns were embellished with ribbons and elaborate trims.

There were many different sleeve designs, but short, puffed sleeves were typically worn in the evening, and long sleeves throughout the day. Gigot sleeves were popular in 1830 but by 1840 they went out of favor. Sleeves with fuller wrists came to be in fashion.

Rich silks were in demand. Floral printed fabrics were used to make gowns after 1830s.

By the 1850s the gowns were changed to two piece ensemble. A skirt and a blouse created the same silhouette as that of the gown.

For riding Tailored suits were used.

The small waist came to be valued once more, and an ultra-feminine silhouette was sought after. Corsets were still worn. These had a deep busk and were softly quilted and boned.

This refers to a hoop petticoat with a cage frame made of steel or whalebone hoops.

This became popular by the 1860s and continued till the 1880s. The bustle is an underskirt that is flat in the front but voluminous in the back, using pads inside. To make this effect more exaggerated, skirts were bunched up in the back. This, along with the tightly laced corset, created a distinctive hourglass silhouette for the feminine bodies.

In the 1820s, extravagant hairstyles with high top knots became popular, and bonnet or hat crowns were made to fit these fashions. By the middle of the century, hairstyles had evolved into smooth ones with a central parting ending with ringlets on either side of the face and a little bun at the back or just swept back from the face to a chignon. Wearing hats or bonnets outside and wearing linen caps remained in fashion.

Until the 1860s, bonnets, and hats were still worn. The 1870s saw the rise of ornate chignon hairstyles that perched on top of the head, which led to the appearance of even smaller caps. While hairstyles in the 1880s and 1890s were still “up,” they did not have the height or bulk of those in the 1870s. It was fashionable to wear small hats embellished with imitation flowers, feathers, and birds. A hat called Toque with no brim was extremely popular.

Toward the end of the 19th century, it was customary for women’s hair to be placed in a bun on top of the head and blown out around the face. Unless a simpler, smaller hat, like the straw boater, were necessary for informal wear, a large-brimmed hat would be put on using hat pins.

Men’s clothing had undergone a major transformation by the early 19th century, but throughout the rest of the century, little changed.

Men continued to wear the white waistcoat, black tailcoat, and black pants of the early 19th century for evening clothes during the second half of the century. For daytime attire, they wore frock coats with straight-leg pants, a short waistcoat, and shirts with a high, stiff collar. The frock coat featured a waist seam and was single- or double-breasted. It fitted very snugly to the torso. The coat’s front has a square cut. The straight skirts came to mid-thigh or lowered in length.

Throughout the first half of the 19th century, trousers gained popularity. Men began switching from knee breeches to long pants over time. They were initially only worn for daytime and casual attire, but by the 1820s, they were also adopted for evening wear. Breeches remained restricted to court.

The coat was cut higher in the front but still had long tails at the rear. Underneath it was a square-cut waistcoat that reached to the waist. To enhance fit, the lining of the coat’s upper chest and shoulders was occasionally quilted. Some dandies in the early 19th century wore boned corsets to help define their waists.

The top hat, which was worn for daytime and formal attire during the 19th century, evolved from the tall hat of the late 18th century. Men groomed their hair curled short or carefully styled for a windswept effect. In the late 19th century, hair was still groomed, but it was cut short and close to the head. Keeping beards and mustaches grew to be common among men.

In the nineteenth century, children’s clothing in Europe and the United States was hand-sewn at home by mothers or seamstresses. Before they learned to crawl, all infants wore long dresses with hems that extended well over their feet.

Little boys wore skirts or dresses until they were between the ages of 5 and 7; toddler girls and boys were dressed similarly. Boys frequently wore long hair, making it difficult to distinguish between them and the girls in historical pictures and paintings.

When boys transitioned from dresses to trousers or short pants, known as knickerbockers, it was referred to as “breeching.”

Young girls wore flowy gowns with ruffled yoke tops for most of the century. The gowns could either be worn loosely or with a belt and sash. Young girls typically wore pinafores, full-body aprons with ruffled trimming to protect their outfits.

While children were often dressed like tiny adults in fashion plates, this was not usually the case in reality. Compared to casual daywear, clothing for special occasions had more attractive lines, tailored fits, and luxurious fabrics.