Names of clothes in Ancient Greece 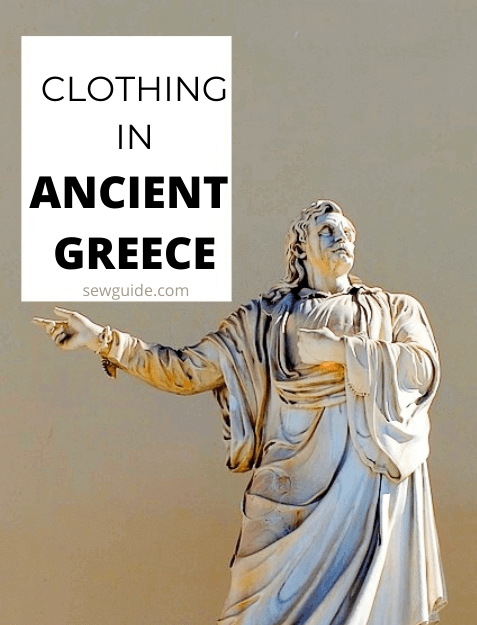 A period between 1200 BC to 320 BC is considered to be the golden time period of the Greek civilization. It is said to have influenced all the western civilizations that came later and is an significant part of the world’s history in all fields – political, artistic, social, philosophical and fashion.

The facts we know about Ancient Greek clothing come mainly from the available artworks, artifacts and Greek literature.

Chiton was a simple white tunic fastened at the shoulder. It was usually a light weight tunic made of linen or lightweight wool. It was pleated and held at the shoulders by brooches or pins and belted at the waist by a belt made of leather or cloth. Belting above the waist created the empire waistline. The belt was called a zone, pronounced as zoh-nay. It was worn with sleeves or sleeveless. The folds of the chilton can fall over the arms to replicate sleeves. They could be pinned or stitched to cover the arms.

The chiton was worn as a daily public outfit. The men, women, and children wore chiton. The men wore it to the knees whereas women’s chitons were ankle length. The statues of Diana and Athens are seen wearing a short and long chiton.

The chiton was the dress of the craft people, athletes, warriors, prostitutes, and slaves. The slaves’ chiton was different from others and was called Doric. The people who did the manual work wore only the loin clothes.

The chlamys was a short cloak. It was worn as a cape fastened at the neck or over one shoulder and fastened on the other. Sometimes men were seen wearing chlamys over the chiton.

This garment was mainly worn by soldiers, messengers and upper-class servants. The chlamys is observed to be worn by statues or paintings of Apollo, Mercury and other heroes.

The Peplos is an overfold usually worn over the chilton. It was worn by men and women, but more often worn by women. It was worn instead of chiton or over it. An upper-class woman would wear a chiton as an undergarment and wear a decorated and ornamented Peplos over it. The Peplos fell to the feet and sometimes trailed behind. It was chiefly reserved for a public appearance or ceremonial occassions.

The peplos / peplums were sometimes wound twice around the body – first under the arms and the second time over the shoulders. Such peplums were known as Diplax.

When performing sacred rites or in mourning, the peplums were drawn over the head as a mark of humility. In rain or in cold weather also, it was drawn over the head. The peplums were never fastened by means of clasps, pins or buttons. The statues of goddesses and noble ladies are depicted wearing the Peplos and chiton or sometimes the Peplos alone. Most of the greek goddesses can be seen in artefacts wearing the peplos.

Peplum of modern clothing is derived from this – you can read more on pleplum here.

Himation was a large cloak of five yards long and one yard wide. It was usually dyed and ornamented. It was worn over the chiton or Peplos by both men and women. The himation can be worn as a cape, a robe or a blanket. This was highly useful particularly in the cold Greek winters as it was made of wool.

The ends of the himation were decorated with tassels or beads to emphasize the pattern of the border design. Sometimes a himation was worn with the lower edge woven in points and the upper edge pleated onto a band worn under one arm and fastened on the opposite shoulder.

This style was often seen in women than in men. The goddess Athena is mostly represented wearing this sort of highly decorative pleated himation.

Other garments used in Ancient Greek

Besides these main fours types, they used Perizoma and Strophic. The perizoma was underwear or loincloth. The strophic was an innerwear similar to a bra worn by women.

Apart from these, women would ornament their outfits with a shawl which was known as the Epiblema. It was either to provide warmth or used as a decorative piece of finery.

The Greek civilization begins with the Minoan civilization. The Minoan men are depicted as wearing loincloths, cloaks, and sandals. Sandals were used for outdoors as they walked barefoot at home. Men are also shown as wearing armbands, wristbands and jewelry. They had very long hair, often let loose or held in place by a headpiece. The headpiece was either a feathered headdress or hat. The garments were often dyed in red, yellow, black and purple and were expensive. The women on the other hand are shown in bell-shaped flounced skirts. They wore it with a tight bodice that lifted to show cleavage. They were also seen to wear a belt over the skirt. The women also wore headpieces and jewelry. The items of clothing were in the shades of red, blue and green.

Once civilization again started to thrive in Greece during the archaic and classical period, the garments underwent a  makeover from the previous period. Gone were the intricately sewn garments and the new garment was a single piece of cloth draped around a person and then folded and held in place. The garments were made of linen and wool. The dressmaking and spinning of wool were the work of women which the men sold.

There was class divide in terms of dressing. Dyed and decorated clothing were available only to the wealthy. Affluent people appointed weavers and dyers in women’s quarters. Linen was very expensive and available to only the upper-class people. Wool on the other hand was used by people of all classes and age groups.

Read more about Greek civilization here. Book to read on Ancient Greek civilzation and clothing – Encyclopedia of Ancient Greece by Nigel Guy Wilson. You can read some parts here.