What is a Kimono? Some interesting facts about this Traditional Japanese Clothing

I adore everything about Japan. Whatever I have seen of Japan through books and TV shows has made me respect the country, its people, their culture, its advancements in technology, its resilience in facing tragedies, its punctuality, the beautiful demeanor and manners of the people – everything worthy of appreciation and emulation.  A woman in Kimono, their traditional dress, is the first image that comes to my mind when I think of Japa. 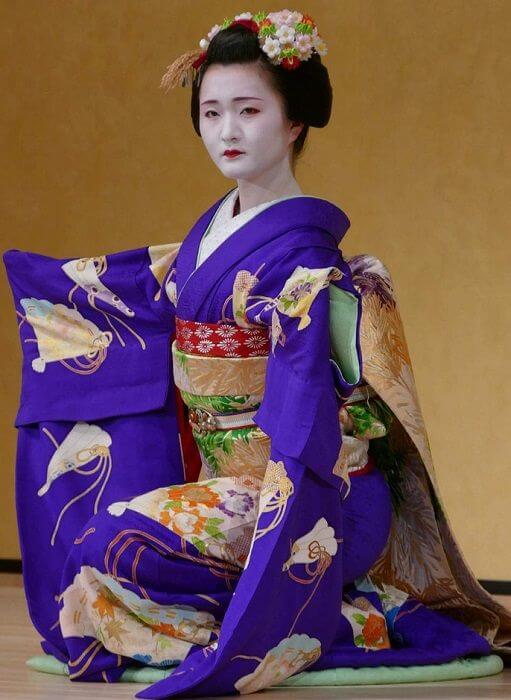 What is a Kimono?

A kimono is a long traditional Japanese dress that wraps around the body and has distinctively voluminous sleeves. It is tied around at the waist with the Obi belt. The elaborately tied Obi belt, which could be as long as 12 feet or more, is another distinguishing feature of the Kimono. The Kimono used to be decorated with the wearers’ family crest.

In Japan, a Kimono is worn by both men and women. It became the traditional clothing around the late 700’s, and everyone in Japan used to wear their Kimonos, all the time, men, women, and children. Since then, Kimono has undergone many changes.

Kimono was accepted as the traditional clothing of Japan for a long time. But with the Meiji era (from 1868) the Japanese government started discouraging Kimonos (Wafuku meaning Japanese clothes) and Japanese people were encouraged to adopt western clothes.

Nowadays, Kimonos are worn only during special occasions like funerals, festivals, and weddings.

How is a Kimono worn?

Kimono is a wrap-around dress worn left front of the kimono overlapping the right front; worn the same way by both males and females.

To wear a kimono in the traditional way you need a lot of accessories like the obi belt, and other accessories that will support the obi belt like Obimakura, Koshihimo, Obita, Datejime which gives the obi-belt support, make it look good and prevent it getting wrinkled and out of shape when tied around the body.

If you are really interested in being authentic, you can also get a Nagajuban, an under-kimono worn under the kimono, tabi (white cotton split-toe socks) & zori sandals. Hakama is the name of pants, sometimes worn under kimonos by men. Michiyuki is a coat worn over the Kimono. 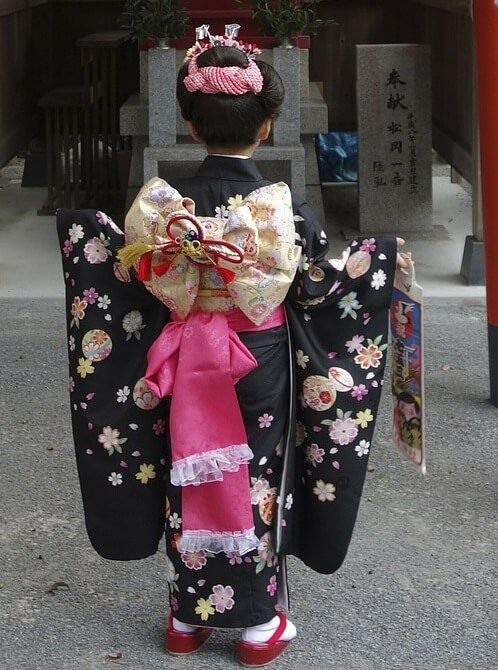 How to wear a Kimono

Wearing a kimono is very easy if not for the obi belt tying. The men wear kimonos simply by tying the obi belt around the waist.

But for wearing a traditional kimono, especially for formal occasions, a woman has to tie the obi belt in a special way – it is called ohashori, and it is a triple belting process that involves the obi belt and another belt tied around the obi belt with a bow at the back. This could take hours to perfect. But you could also settle for the simple Obi knot known as the Nagoya obi knot.

If you are rich you will be wearing more than one kimono. You can wear as many as 12 kimonos one on top of the other.

Special features of the Kimono

The experts could tell a lot of things about the wearer like the age and status of the wearer, her family, where she is going to and what is the season etc from the Kimono she is wearing.

“The cut, color, fabric, and decorations of a kimono may vary according to the sex, age, and marital status of the wearer, the season of the year, and the occasion for which the kimono is worn.”

Reference & More reading on this and pictures of traditional kimonos here : History of Kimono

By looking at the sleeves of the kimono you could deduce the age and marital status of a woman. For example young unmarried women would wear kimonos with loose flowing sleeves which are very long as to touch the floor. But married women wore kimonos with short sleeves.

By looking at the crest embroidered on the kimono, one could tell the wearer’s family name.

If you are a child, you will wear kimonos that are brightly colored or with vivid prints and patterns. If you are a very small baby, you will be dressed in a white under Kimono and on top another kimono which will be a bright colored one for a girl and black for a boy.

The kimonos worn by the samurai consisted of three parts: the kimono, then a sleeveless garment known as a kamishimo worn over the kimono and a hakama, a trouser-like split skirt.

Furisode Kimono: This is the formal Kimonos worn by unmarried women. These kimonos have long flowing sleeves that almost reach the ankles. They have colorful and bright designs on them.

Shiromuku Kimono: The white heavily embroidered kimono worn by Japanese brides. An over kimono in a bright color (red or orange) maybe worn over this white kimono at the wedding reception.

Tomesode Kimono: This is a formal kimono with shorter sleeve, worn by married women. The kimono will have designs only on the bottom edge.

Kuro Tomesode: Tomesode Kimonos are usually in a  black fabric  for formal occasions.

Irotomesode: Tomesode Kimonos which are in other colors.

Homongi Kimono: This is a semi-formal kimono with colorful designs /patterns all over it, especially on the back and sleeves. It is also named “visiting kimono”. It could be worn by both married and unmarried women

Tsukesage Kimono: This is a kimono with patterns running up the length of the Kimono on the back to the front over the shoulder and on the sleeves. This is worn on occasions like weddings, other parties, tea ceremonies etc, by both married and unmarried women.

Komon Kimono: A Kimono with small, subtle repeating patterns all over the fabric ; the prints are usually floral; This is a casual style kimono.

Yukata Kimono: This is kimono worn during the summers. It is made of cotton fabric

Mofuku Kimono: This is a Kimono worn for funerals; It is black for men and women with a black obi belt

Montsuki Kimono: This is a formal kimono worn by men for formal parties or ceremonies, like marriage ceremonies of family or relative.

Haori Kimono: A short kimono which looks like a jacket.

Usually, superior silk fabric is used to make traditional kimonos. A habutai silk is a favorite. It is a lightweight, shimmering material. Spun silk is also used.

The summer kimono, which is more casual in nature, is made of lightweight cotton fabric. Usually, blue and white are the colors used for these kimonos called Yukata, but other bright colors and floral patterns are also used.

The colors of the fabric depended on many factors. Color combinations were very important in traditional Japanese kimonos – it was mostly dependent on seasons. The political class also was one factor. More on this on the different color combinations used in Kimonos can be read here.

How are kimonos made?

Kimonos have a straight-line cutting method – almost all the pattern pieces are cut in a straight line.  You need about 12 meters of cloth to make a traditional kimono.

Check out this post “Make an easy Kimono ” for  a simple sewing pattern to make one yourself; How to sew an obi belt

Role of Kimono in today’s Japan :- Newyork times; Life of women in Japan ; How Kimono culture is seeing a decline

5 thoughts on “What is a Kimono? Some interesting facts about this Traditional Japanese Clothing”