A look at Hanbok & other Traditional Korean Clothing

Watching countless Korean historical drama series does not make one an expert in Korean clothing. But it did make me highly interested and invested in it. And then reading about it opened up a world of beautiful Hanboks, Chima skirts, and other fabulous clothes.

Traditional Korean clothing mainly consists of Hanbok (Called Cheoson-ot in North Korea), which has come to mean traditional Korean clothing. People of all ages used to wear Hanbok in Korea. The Koreans continue to wear hanboks for special occasions like weddings and other ceremonies. It is one traditional clothing that has not altered much through the centuries nor lost its importance. 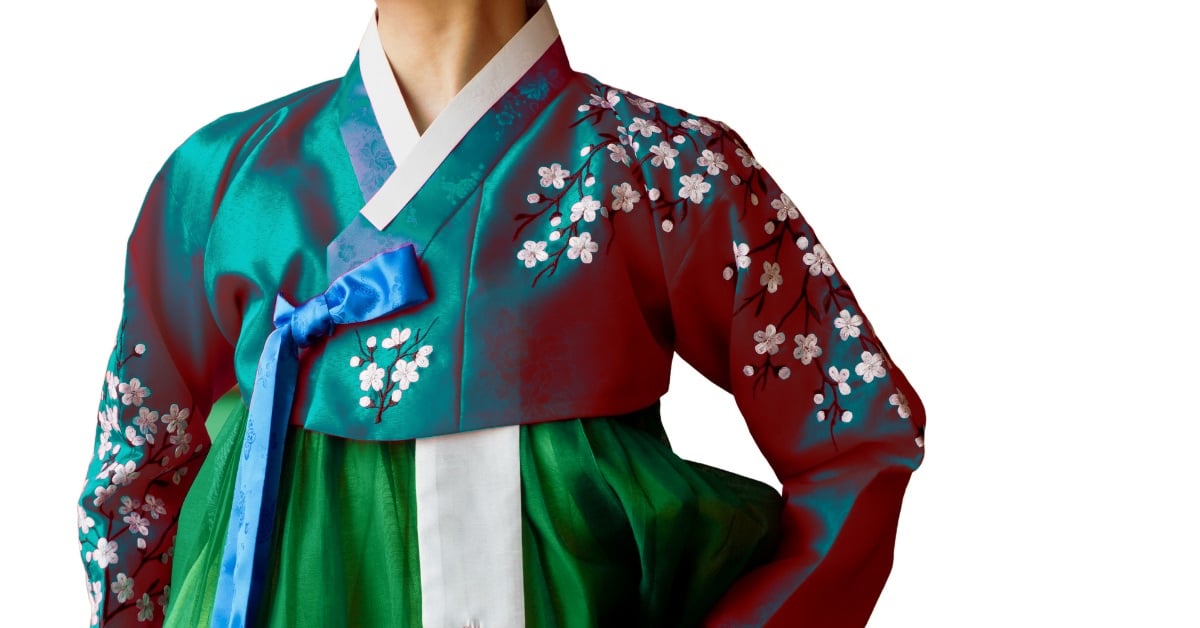 The hanbok, as we see it today, is fashioned after the ones worn during the Choson dynasty of 1392-1910 (Joseon), even though the origin of the Hanbok can be traced back to the Three Kingdoms of Korea period (57 BCE – 668 CE – the period when Korea was divided into 3 kingdoms – Koguryo in the North, Paekche in the southwest, and Shilla in the southeast.).

The original design of the Hanbok seems to be influenced by ancient Chinese clothing, especially that of the Tang, Song, and Ming dynasties.

The specialty of the Hanbok is its graceful shape that allows for growth and vibrant colors. It is made to offer the wearer ease of movement. Women could wear it even when they are full-term pregnant.

Anatomy of a Hanbok
A hanbok consists of 2 parts – the top (jacket) and the lower ( skirt or pants). The basic elements of the Hanbok include a jeogori jacket, baji pants, Chima skirt, and Po (overcoat). 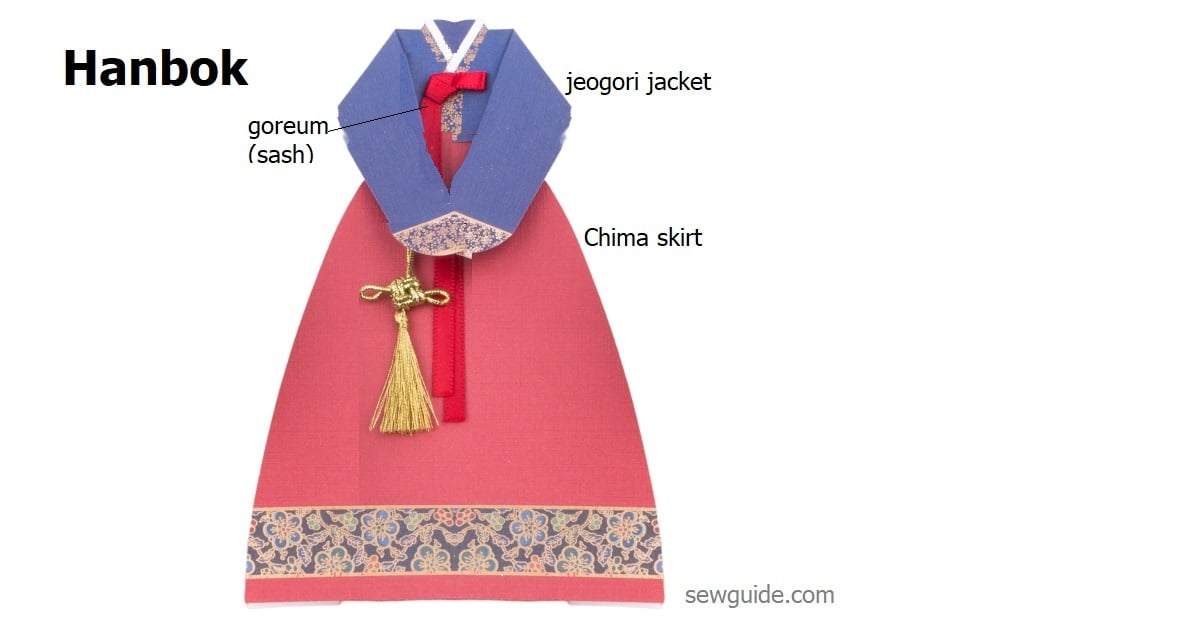 There are different types of Hanbok – everyday Hanbok, special occasions Hanbok, and ceremonial hanboks. The hanbok worn by government officials is called Gwanbok. 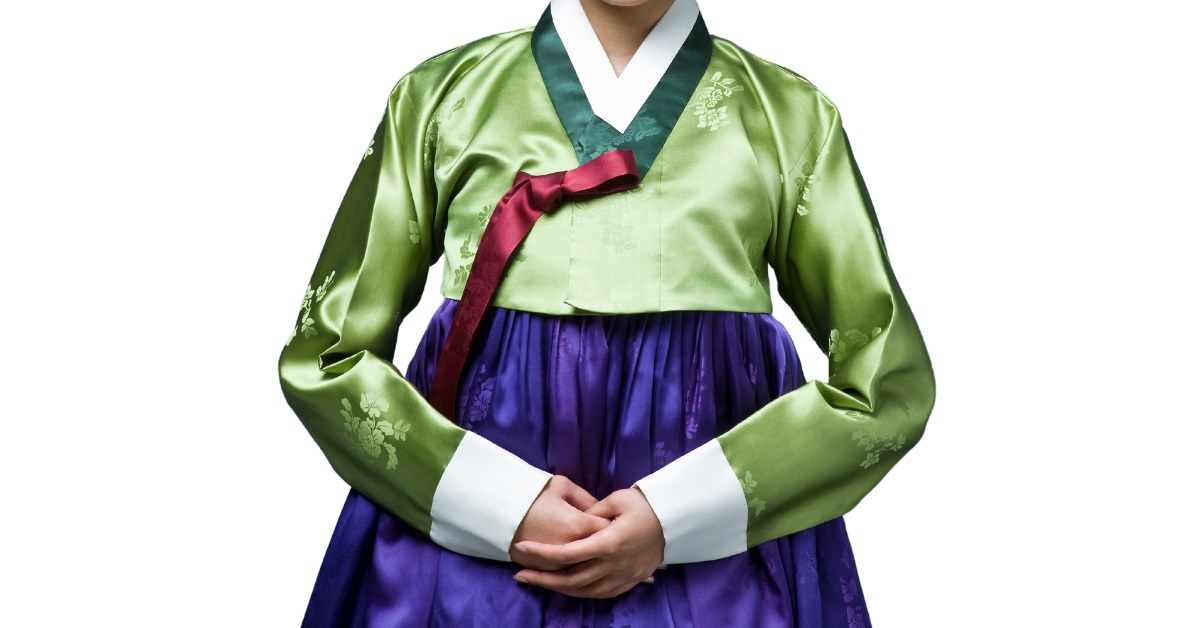 Jeogori is the upper garment of the Hanbok.

It consists of five parts, namely gil, git, dongjeong, goreum, and sleeves. Gil forms the front and back panels of the garment. Git is the trim made of a band of fabric that adorns the collar. Dongjeong is a white-collar stand-up that is removable. Goreum refers to the strings used to tie the jeogori – it is tied into a bow.

The sleeves are full in length and sometimes feature a different colored cuff.

It ends above the waistline. In the earlier days, it used to be waist length for women but later, it shortened to armpit length. 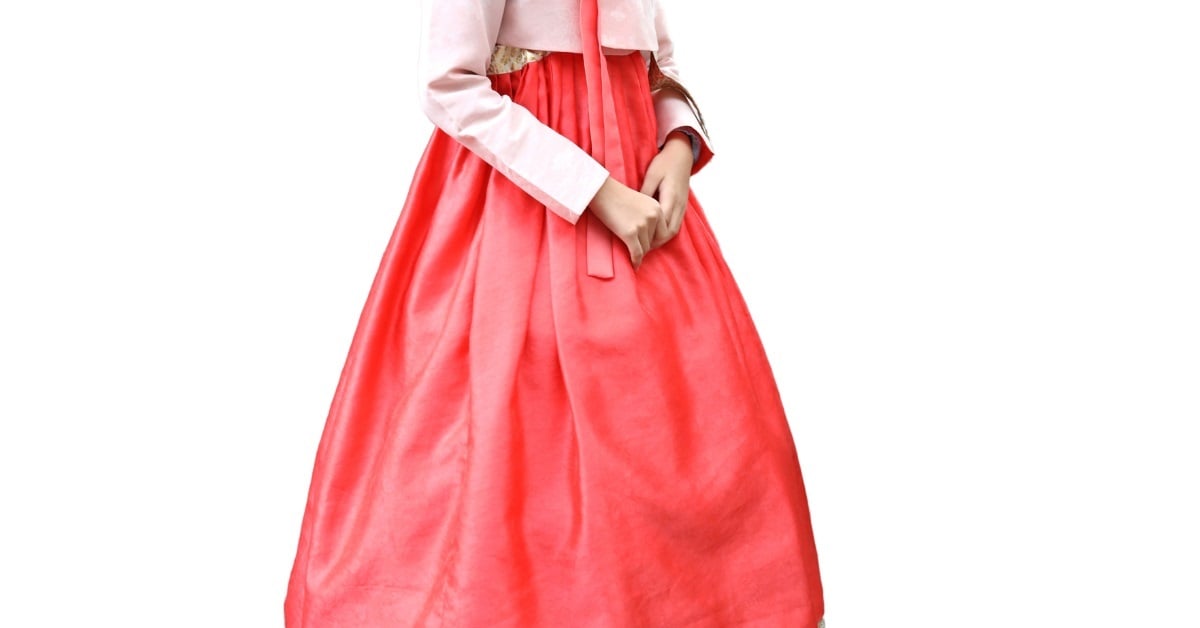 Chima is a wrap-around skirt with lots of pleats. Chima is made of rectangular cloth. It is pleated or gathered into a skirt band which extends into ties used for fastening the skirt.

The underskirt is called a sokchima which later developed into a sleeveless petticoat.

Baji is the trousers worn by men paired with jeogori. The baji is loose enough to allow the men to sit comfortably on the floor. It is fastened by a band around the waistline. Baji can be lined or unlined, leather, silk, or cotton, depending on the style. Some baji pants are embroidered.

Saekdongot is a type of Hanbok worn mostly by children of age one to seven. It is made with colorful stripes by patchworking. The term saekdongot means ‘many-colored cloth’. 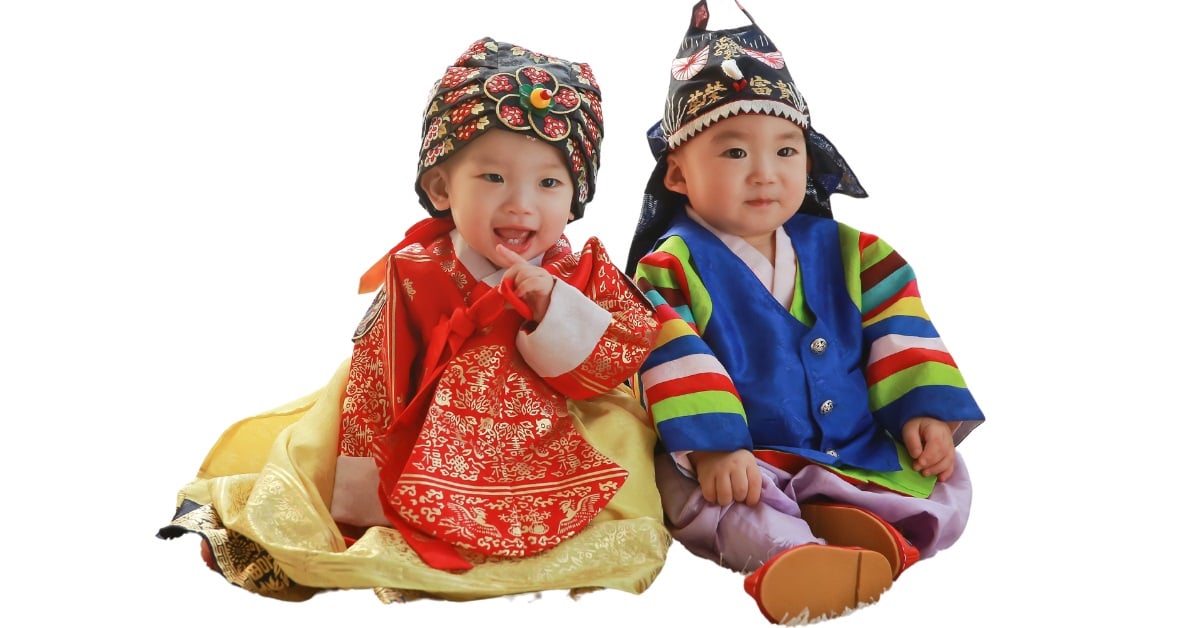 Dangui is an upper garment worn during the Joseon dynasty for ceremonial occasions. It is worn over jeogori. 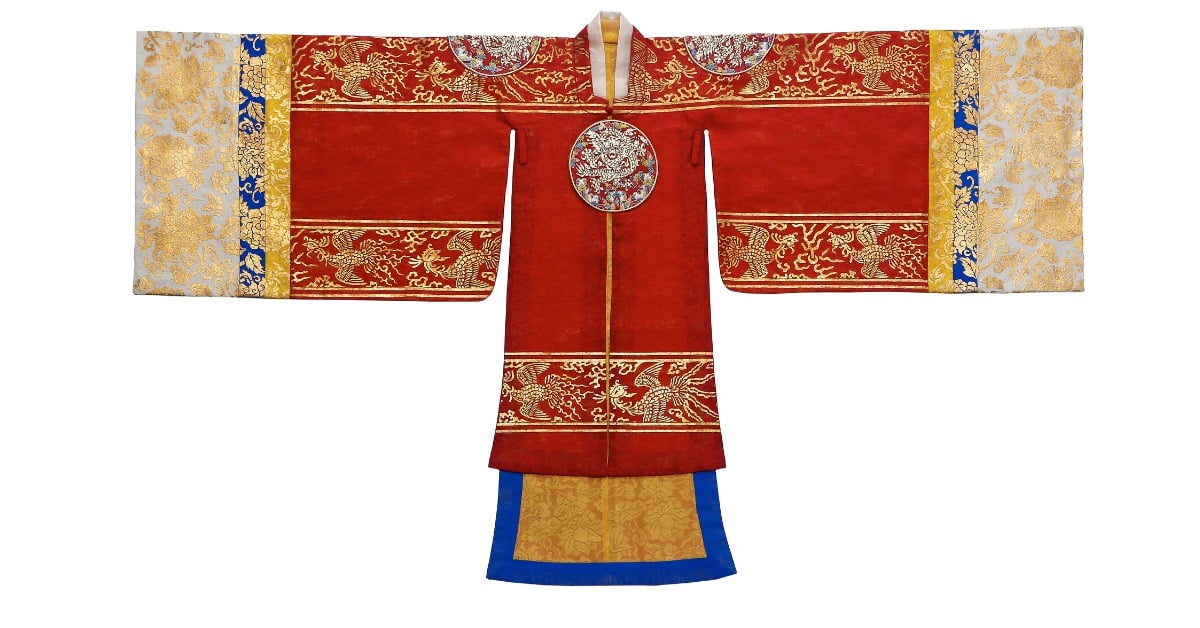 It is a long robe that is elaborately embroidered. It has wide and long sleeves that cover the hands. It has several panels pieced together and has long side slits. It closes in the front compared to many Asian robes that are close to the right. It has a red exterior and a blue interior representing yin and Yang.

The sleeves may have three silk stripes in yellow, red, and blue with a white cuff. The common motifs in the embroidery included flowers, plants, birds, and animal pairs.

Po
Po is a general term used for overcoats or robes worn by men. There are two types of po- Chinese and Korean. The Chinese style was fashioned after the Chinese robes, which slowly became extinct. The Korean po is still used in the modern day. A ribbon is used to tie the po. 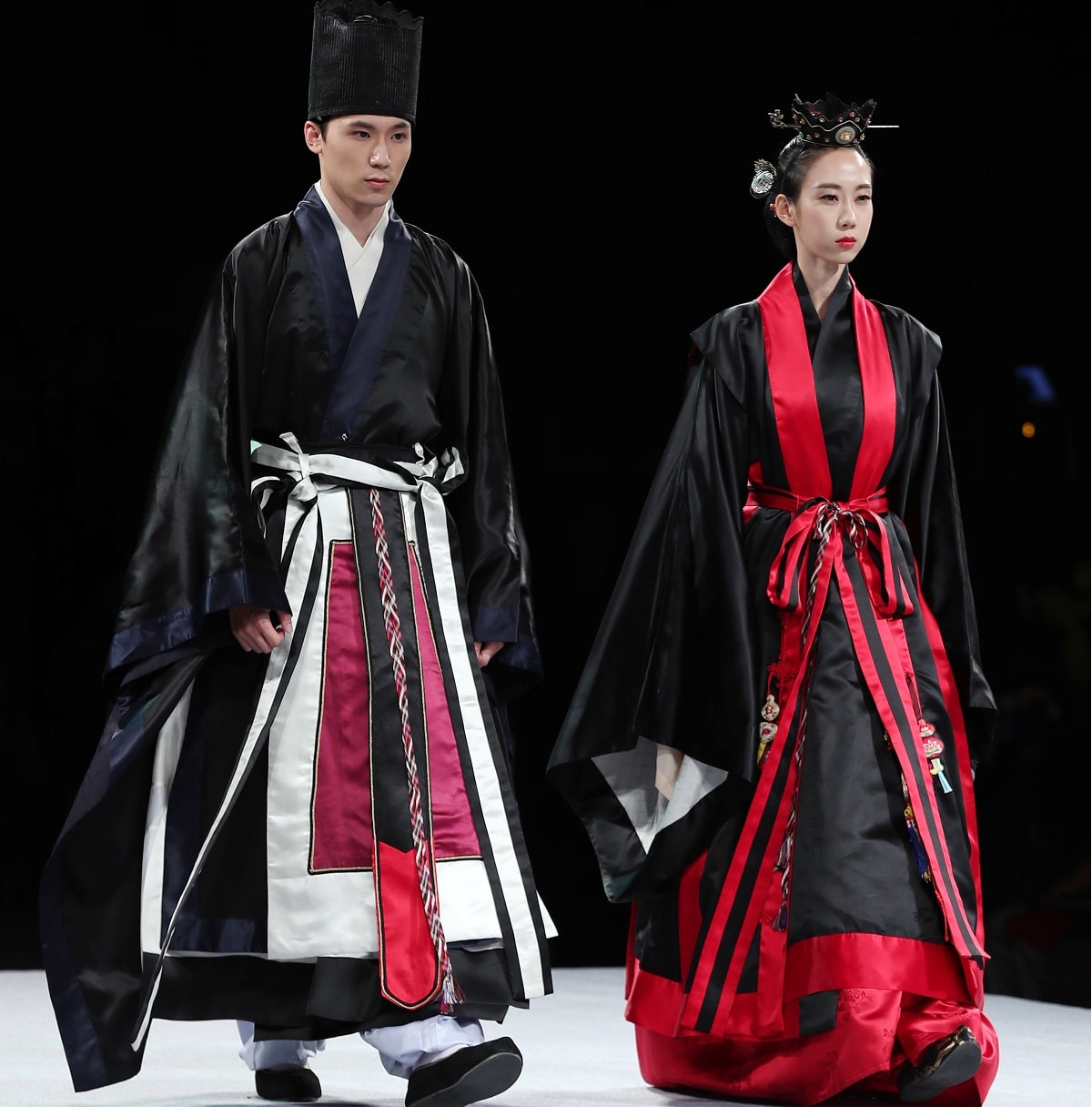 Durumagi is an overcoat worn by men (scholars, officials and upper-class men) over their hanbok.

During the winter, a po made of wool, calico, cotton, and silk is worn over jeogori and baji for protection against cold. It is called Durumagi.

Durumagi worn during summer, is made of ramie or ramie and silk gauze. Durumagi is also worn for ceremonial purposes. A variety of colors and designs are used for Durumagi. It is still worn as a part of traditional attire during formal occasions.

Dopo was an overcoat worn mostly by Confucian scholars. The kings, princes, and government officials also wore dopo. It was ankle length with a v neck and wide sleeves. During the 1894 reform, all varieties of po including dopo, were prohibited by King Gojong. Only Durumagi was allowed to be worn.

Jokki and Nagoya denote vest and outer jacket respectively. It became a part of traditional clothing after western culture started influencing Korea. They are worn over jeogori for warmth and style. Though magoja was initially considered a male dress, it became unisex later.

Garot or Galijungi is a type of Hanbok worn by the locals of Jeju island as everyday dress. Garot was dyed with unripe persimmon. The fabric was soaked in unripe persimmon pulp and dried under the sun without any wrinkles for uniform dyeing. It was again soaked in water and dried. This was repeated for 7- 10 days to get a high-quality dark brown color. Garot was moth-proof, waterproof, and had antimicrobial properties.

Gonryngpos was a robe fashioned after the Ming dynasty Chinese robe which the Kings and court members wore over a Hanbok. It normally had a dragon embroidered in a circle. It was made of red silk to wear during winter, and during summer, they wore red gauze. It was worn with a jade or crystal belt. The king wore scarlet gonryngpo and the crowned prince wore a blue gonryngpo. The king wore embroidered dragon with five toes, and the crowned prince wore embroidered dragon with four toes.

Hakchangui
Hakchangui is the traditional uniform that the scholars wore. It was cut straight and hung down with the front portion longer than the back portion. Hakchangui was fastened with small strings and a single bead.

Jeonbok is a long sleeveless vest worn by Korean military personnel. The back of the jeonbok is open from the high waist to the ankle. It has long slits on both sides.

Kkachi Durumagi is a colorful overcoat worn by children. It literally means magpie overcoat. It was worn mostly by young boys on New Year’s Day. It was worn over jeogori and jokki. Kkachi Durumagi is also called obangjang Durumagi. It is so-called because it is made of five colors representing five directions. Blue color for East, white color for West, red color for South, black for North, and yellow for Center.

The overlapped portion of the garment in the Center is called seop and is made in yellow color. The large sections in the back and front are made of yellowish-green color. The blue color is used for git, goreum, and doltti ( the embroidered belt). Kkachi Durumagi, for girls, has red or purple colored git, goreum, and doltti. The sleeves are made of colorful striped fabric. 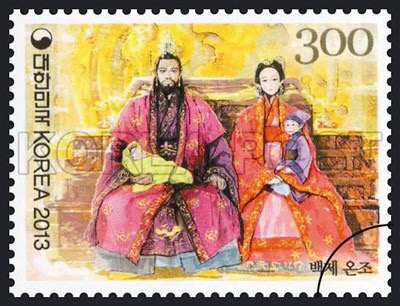 Wonsam is a ceremonial topcoat over the Hanbok worn by queens and high-ranking court ladies. The Queen, the Princess consort, and consort to the eldest son of the prince wore it for smaller ceremonies. The wife of high officers and court matrons wore it for major ceremonies. It was worn by commoners for their wedding ceremonies.

Books to read to know more :

1 thought on “A look at Hanbok & other Traditional Korean Clothing”