What is Cosplay? & What is a Cosplayer?

Most of us were undoubtedly told as children that we could be anything we wanted to be. While the premise is ambiguous, kids may take this literally to mean their favorite fictitious character and think, “Yes, that’s what I want to be.” Today, you can ‘almost’ be your favourite character, easily – through Cosplay. 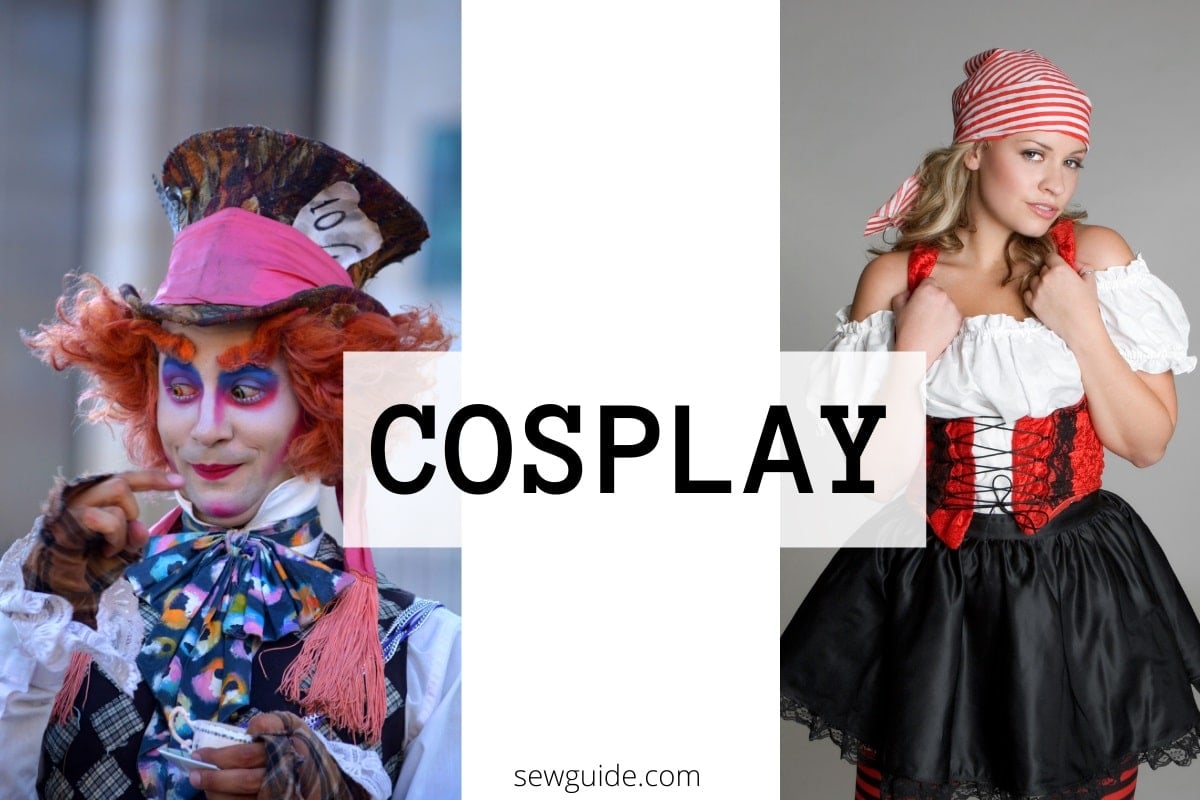 ‘Cosplay’ is a portmanteau word that combines two or more words and expresses the meaning of all these words; Word ‘Cosplay’ is a combination of’ costume’ and ‘play.’ A person who loves to do cosplay is called a Cosplayer.

What is the meaning of Cosplay?

Cosplay refers to dressing up as a fictional character from movies, television series, graphic novels, books, video games, and other forms of media or a concept. It is essentially putting yourself in your favorite character’s shoes, literally and figuratively, complete with clothes, accessories, wigs, and other props, and whatever it takes.

Cosplay is an activity that tests the limits of our creativity, gives us a break from reality, and entertains us as an art form. It is a mass entertainment source for many people interested in fashion, costumes, and fictional characters.

Cosplay is a form of fan identity, where the fans identifies themselves as the character they admire. So cosplay cannot just be limited to the costumes and stuff – it is much more than just dressing up as a character. Cosplayers go to great lengths to imitate a character’s mannerisms and actions.

Who is a cosplayer? How do cosplayers dress up?

In cosplay, the costumes mimic everything of the characters from anime, comic books, television series, and video games, including clothing and hairstyle to the point of perfection. Everything is matched as much as possible.

Cosplayers not only make genuine costumes, but they also act in character and are usually experts on the characters they are portraying. Some fans will go to great lengths to fully embody the character’s attitude and mannerisms.

Because many of these costumes are constructed by hand, a lot of cosplayers are experts at everything from makeup and fabric dyeing to metalwork and robotics.

Cosplay is all about having a good time, whether you buy your costumes online or make them yourself.

Why is Cosplay so popular?

Cosplay is all about pretending to be someone else; it gives us a venue to take a break from reality and immerse ourselves in another world that is fantastic and out of this world.

In a world of harsh realities that are hard to digest and full of stress and pressure of everyday normal life, cosplay provides its followers a reason to be happy and enjoy themselves as some one else.

Taking on the vibrancy of these characters changes them into some one who can conquer the world or vanquish all the enemies or in short, live a fantastic life so unlike their ordinary lives.

Where did cosplay originate?

Cosplay today enjoys worldwide recognition and followers, but it essentially started gaining the current popularity and momentum in the last few decades in Japan, where anime and manga characters enjoy massive fandom.

Cosplay definitely existed before this – The first world science fiction convention in 1939 and its subsequent gatherings always attracted many attendees. In 1939 during the World Science Fiction Convention, Myrtle R. Jones, also known as Morojo, appeared in a science fiction-inspired costume she developed for herself. She’d also made one for her boyfriend, Forrest J. Ackerman, and the two of them arrived as time travelers, based on H.G. Wells’s novel Things to Come (1936). But it was not called cosplay, nor did it have the universal popularity that it gained in the streets of Japan.

In 1984, Nobuyuki Takahashi, a Japanese animator, first coined the term ‘kosupure’, which means ‘ To portray a character. By the 1990s, his term had caught on; Kosupure or cosplay had become a popular pastime in Japan.

In which cultures/countries is Cosplay more popular?

Today cosplay is popular throughout the world, although it is most popular in Japan, the United States, South Korea, and China.

In the United States, costuming is popular during Halloween. Graphic novels have always been very popular from the 1930s. Comic book characters form a very important part of popular culture in America. Superhero books and novels and popularity of fictional characters like Harry Potter have made people wanting to be them, or atleast looking like them. Comic cons are getting increasingly popular. Wide spread use of social media has made cosplay more popular in the US than earlier.

But, no one does cosplay quite like the Japanese, who consider cosplay to be more than a pastime – it’s a way of life for the scores of fans there.

In Japan, there was already a popular subculture called Otaku consisting of anime and manga fans. Cosplay is a significant part of this Japanese subculture.

How to start your own cosplay

You can even dress up as a meme or a concept.

You have 3 options – Purchase your costume components or make them yourselves or do these two together.

You can find cosplay-specific items on sites like amazon, and ebay or specialized cosplay stores or assemble them from everyday clothes available at your local stores. If you have the budget, and/or if you do not know how to sew, you can hire a dressmaker to create the outfit from scratch.

Some more questions on Cosplay

Is Cosplay trendy now in 2022? What is the scenario now?

In terms of cosplay events, many things have changed since the pandemic caused havoc all around the world. But there is now a ray of hope that everything will be as it was.
Unlike 2020, when the pandemic forced the cancellation of nearly all events, there has been some change in the cosplay scene. After March 2021 there has been a comeback of cosplay gatherings, albeit in a small way. While they’re not quite back to pre-pandemic levels, it’s encouraging to see that things are starting to change in 2022.

What could be the most famous cosplay costumes in 2022?

If you look at the most popular Instagram hashtags (which is an indicator of the popularity of a particular character), you can find the characters and costumes which are most popular in the cosplay space right now. (Data as of 7th May 2022)- This changes every other day/season with new books, movies, and anime shows coming up.
Spiderman – 23.5 million
Batman – 29.7 million
Joker- 14.4 million
Wonder woman – 9.7million
Harley Quinn-6.9 million
Deadpool – 6.2 million
Deku – 3.1 million
Todoroki – 2.2 million
Bakugou- 1.7 million
Poison ivy – 1.1 million

How much does it cost to Cosplay?

Cosplay is typically an expensive hobby due to the cost of costumes, wigs, and other accessories. Most cosplayers are obsessive about perfecting the look of their favorite characters. This need for authentic-looking costumes adds up to the cost.
To counter this, cosplayers usually DIY their clothes and accessories by learning to sew and craft. Being resourceful and handy can save a lot of money and allow them to carry on with the hobby. Recycling old clothes to make the costume is a very welcome trend among cosplayers.

Why is cosplay considered misogynistic by some?

One of the most common accusations leveled toward cosplay is that it objectifies women. Some people over-sexualize it. In Japan, for eg, maid cafes where girls who dress as nurses maids are popular. These cosplayers are accused of ‘objectifying’ themselves or dressing up in over feminine clothes, which demeans females.

How is cosplay related to anime?

Most of today’s kids grow up watching some of the most famous anime characters like Doraemon and Sazae-san. The culture of anime and manga is powerful in Japan. Anime-otaku refers to people who are obsessed with anime and manga characters. Loving these characters to wanting to look like them is not far – especially in the innovative and liberal street-style culture of Japan. Cosplaying has always been a popular pastime among anime lovers. This is the connection between anime and cosplay.

Can both men and women cosplay?

In cosplay, there are no limitations. People of all genders, orientations, and expressions are welcome to participate in cosplay. Gender-bending is encouraged. Cosplayers engage in ‘cross-dressing’ or ‘gender-swapping,’ which involves dressing up as a character of the opposite gender.

How old is the average cosplayer? Am I too old to start?

Cosplay has no age restrictions. All ages are encouraged to dress up as their favorite characters. Cosplayers of all ages can be found, though the youth between the ages of 15 to 24 are the most enthusiastic.
Many people begin cosplaying when they are very young for parties with the support of parents and then continue indulging in this hobby even as they become adults, attending cosplay events and even entering cosplay contests. They can be lifelong engrossed in the art that is cosplay.