If I wanted a fabric which is lustrous and beautiful, made with very strong fibers, and drapes beautifully on the body, which keeps me warm in summer and cool in winter and absorbs sweat from my body, and does not seem to get dirty fast and is available in almost all the vibrant colours I can imagine and is as soft as any fabric in the world and to cap it all, is naturally made, biodegradable and environment friendly- would you call me greedy ?

But I am only asking for Silk, the Queen of all fabrics.

It is not greediness, it is ‘liking the good things in life’.

Yes, Silk is an indulgence but well worth the prize because of its many superior qualities. 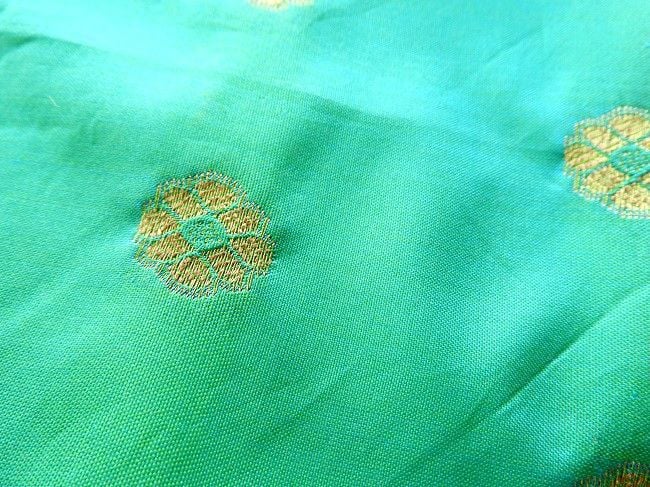 The famous fashion designer Oscar de la Renta compared Silk to diamonds; He, who makes the most gorgeous dresses would know. Silk is a beautifully lustrous fabric made from an animal fiber with the same name. It is the finest of all natural fibers and one of the strongest. Silk is regularly used to make garments, accessories, home furnishings, tapestries, rugs, despite its high cost.

When you think of silk, no other country comes to mind than China. This is not surprising, because the art of making silk was discovered in China. The wife of the Chinese empress, Lady Hsi-Ling-Shih is said to have sponsored the production of silk in those days – this was around 2600 BC, ie about 4000 years ago from now.

Silk ribbons and woven fragments of silk cloth have been discovered in Qianshanyang in Zhejiang province (China) dated to around 3000 BC.  This seems to be one of the earliest examples of woven Bombyx mori silk.

In China, the knowledge of the production of silk was kept a secret. For 2000 years no other country knew how silk was made – the cultivation of the worms, the process of creating the fabric from those fine fibers that emerged out of the silkworms – everything was closely guarded.

But soon other countries found out about the incredible silk cloth and how it is made. Chinese immigrants brought the knowledge of the silk fabric to Korea and later countries in Asia like India found it out. The silkworms were smuggled out of China. Silk found its way into countries in the Middle East, Europe and North Africa like Greece, Italy,Turkey, Spain, Portugal, and France. The trade routes followed by the silk became known as The Silk Road. By the thirteenth century, Italy had become a major center for silk production in the West.

Today China and India together produce more than half of the world’s silk. Other countries like Japan, Thailand and Italy are also producing silk.

Read more on the History of Silk here

What is silk made of and How is it made ? 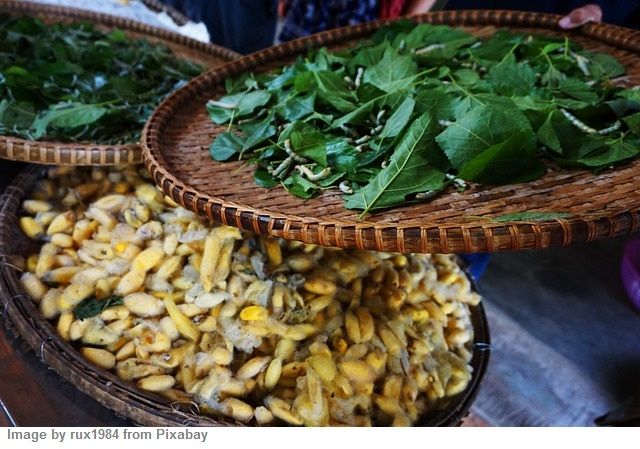 Silk is made from Silkworms (known as Bombyx mori) and Bombyx mori eats mulberry leaves. I learned this in School. Today I read in Wikipedia that ‘The silkworm is the larva or caterpillar of the domestic silk moth, Bombyx mori’. Fine silk and Bombyx mori is interconnected, worm or moth.

When mulberry leaves put forth their leaves – this is the time that these silkworms are born- these helpless worms feed on the leaves. In the silk manufacturing process, they are kept in a tray filled with carefully selected tender and succulent mulberry leaves for about 25-28 days. It is said that a worm eats about 10,000 times its body weight of mulberry leaves and increase their weight to almost 5000 times in this short span.

You can learn more about Bombyx Mori here.

Sericulture refers to Rearing of silkworm for the production of silk.

When it is fully grown, it climbs onto a twig in the natural environment. In sericulture, it is placed on a special frame. If you are growing it at home you will have to give it a bamboo/plastic/metal frame, for the larvae to weave his cocoon around it. 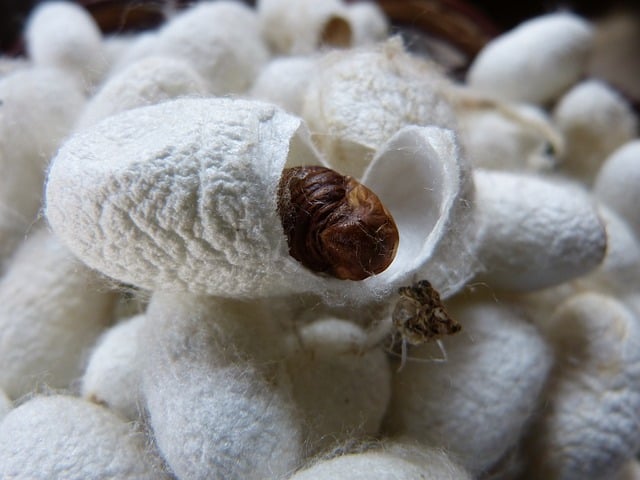 The worm starts to spins a cocoon around itself. This cocoon is made with a sticky substance that comes out of an opening in its underlip. This is made by mixing a fibroin protein compounds that come out of its salivary glands and another substance called sericin (silk gum) in its mouth.

As it comes out, this sticky substance solidifies when in contact with air into the silk fiber. In three days it makes thousands of meters of this fiber. For about 10-15 days the silkworm will be a pupa inside this self-made home. Then it undergoes metamorphosis into a furry winged moth.

The moth will eventually worm itself out of the cocoon – but this is not allowed to happen unless the moth is required to breed eggs. This will damage the silk fibers in the cocoon or cut it short, so these worms are killed by putting them in boiling water /oven. When the worms are put in boiling water the sticky sericin coating of the silkworm also dissolves. 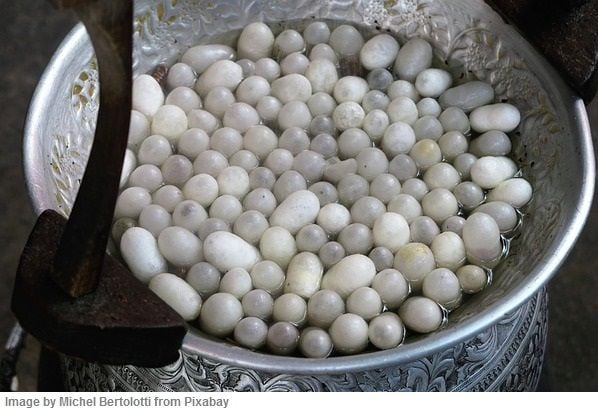 Cocoons are sorted according to their color and texture. The single cocoon in carefully unraveled and the fiber is wound /reeled on a spool. Usually, about 6 filaments are reeled together to create a thread. The single strands of the thread may be doubled and twisted for strength. 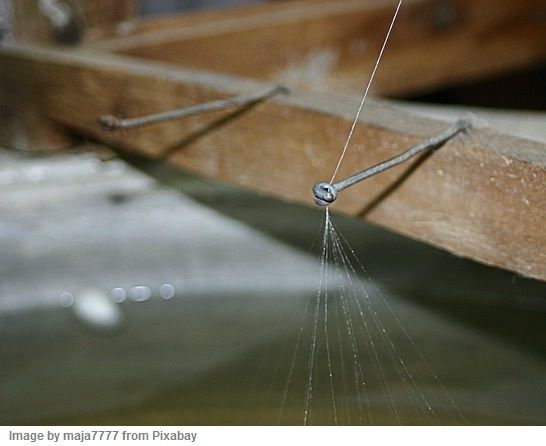 This long thin fiber is silk with many impurities. The fibers are taken out and washed thoroughly to remove any residue/gum etc. The yarns are boiled in a soap solution to remove the natural silk gum or sericin. It has to undergo many washes and treatments before it is usable for weaving. Thus you get your silk filaments ready to be weaved into fabric.

You just now killed your pet for some thread – but what a thread. Now you need to kill 10 kg of silkworms to obtain 1 kg of silk.

Makes one rethink about buying more silk fabric, doesn’t it?.

The Mulberry leaf-eating silkworms produce the finest silk fibers but there is another type of silkworm with over 500 species – the wild silkworm (Some species are Antheraea mylitta, Antheraea pernyi and Bombyx croesi).  They feed on oak and other leaves. This silkworm is grown in India, China, and Japan with China leading the production.

The fibers that emerged from these worms are brown in color and are coarser and heavier than the mulberry silk. They are called Tussah silk in China and India (Tusser) and wild silk in Japan.

Then there is the silk which is from the domesticated silkworm Philosamia rinini. In fact, the Eri silk as this silk is known is more eco-friendlier than mulberry silk in that the cocoon is not boiled to make the silk fibers – the silkworm survives and lives its own sweet life.

Other kinds of silks

Silk is not formed from silkworms alone – they are made from spiders and mussles and they are equally good or even better than the ones that silkworm gives.  Sea silk is made from mussels. You can learn more about the different kinds of silk fabrics here.

Related posts : How to wash silk; How to sew with Silk