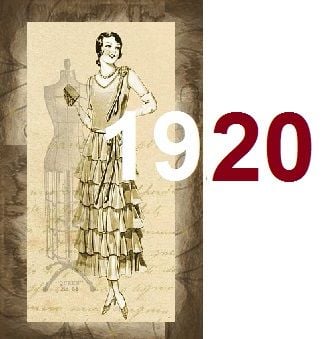 As we stand on the cusp of a new decade, there is a renewed interest in all the things that happened in the 1920s. Other than the 100 years in between, there is a world of difference between the starting of the 2020s and the 1990s.  But at the same time, there are a lot of similarities.

There were startling technological advancements in the 1920s. Radio, Telephone, sound movies, mass manufacture of automobiles, increased use of airplanes for travel  – all of these changed the world completely. There are similar great technological advances predicted for this decade (2020’s) as well.

There is economic inequality prevalent in both the decades, with the rich ending super rich and poor ending even more poorer. There was alarming predictions of a great depression by many economists for this decade and this Great depression really happened towards the end of the 1920s.

As for the differences – A sense of optimism after the World War (1914–18) and sudden affluence of people and the feeling of freedom and exuberance it brought along can be seen in most of the changes in the western society during the 1920s. But today, climate change and unrest are bringing on a sense of pessimism than anything.

A prospering economy and high employment opportunities – this not the scenario that we wake up to in 2020’s, but it was so in the early 1920s in the US and mid way through the decade in Europe.

In the 1920’s the world was recovering from the devastating effects of a war, and people celebrated the arrival of peace with decadent partying and a bit of rebellion. Peace won after a long war was savored and valued, though with a little cynicism; today we are fast hurtling towards war and strife with no caution whatsoever, disregarding all lessons of the past.

If these similarities and differences stand or will change can only be confirmed with time. But these are not our primary concern. Fashion on either side of the Atlantic Ocean during the 1920s is.

General fashion trends in the 1920s

The fashion of the women of the western world turned on its head, from what it was earlier- everything changed drastically after the war. It was a pioneering era like no other, because of the changes it brought about in women’s fashion.

Women’s fashion of the era was a blend of comfort, practicality and style. Loose and straight silhouette of skirts and dresses of women were popular during the 1920s. Camisole type Chemise dresses which hung loosely from shoulder to knees worn with stockings and knee length skirts (pleated or otherwise) paired with cardigan jackets ,  pajama suits and Bathing suits were popular. The cloche hat was a staple. Pleated skirts, fur scarves, drop waist dresses, Costume Jewelry, the Little Black Dress (Coco Chanel’s innovative must have clothing in every woman’s wardrobe) all were in fashion throughout the decade. For occasion wear, fitting gowns with revealing necklines and sleeveless styles were preferred.

Fashion of the 1920s is famously remembered as an expression of the attitude of its independent rebellious women.

Women discovered financial independence and even the right to vote in the US – they held jobs with good wages. Women were finally able to break away from the shackles of Victorian dressing including the constricting Corsets, movement restricting billowing long skirts, long hair tied down, and overall modesty emphasizing styles.

Women exercised their newfound freedom through fashion – hemlines that went above ankles and even knees (by the mid 1920s) in short dresses and skirts, short hair, loose silhouettes, sleeveless styles, and lots of makeup – everything proclaimed the change in status of the women.

A theory was proposed by economist George Taylor in 1926 that linked hemlines and economic progress. ‘The theory suggests that hemlines on women’s dresses rise along with stock prices.’

The Flapper fashion was a sharp contrast to the fashion of previous years and beyond. Flappers referred to independent young women with short bob hair who wore short loose dresses and makeup, and partied hard with cigarettes in hand. Knee length hemlines, a tube shape and dropped waistlines were features of this style. The style created the look of a long and slim figure. The length made women’s movement effortless, be it on the dance floor or getting in and out of cars or inside a workplace.

The flapper dress for parties was made of luxurious fabrics with lots of embellishments like beading and fringes with an addition of strings of beads hanging over the dress as extra decoration and this was worn with long necklaces and high heels.

With the end of war, people who had money, spend a lot on luxurious fabrics for their clothes. Evening wear were made of expensive fabrics like silk, satin and had beads and other embellishments. Art Deco style was reflected in the geometric shapes used in clothes – in the forms of arrangement of beads or as fabric patterns.

But everyday clothes were also increasingly made of natural fabrics like cotton and wool. Rayon and knits were also popular. Tweed, a handwoven wool fabric and flannel became very popular fabrics for suits and trousers. 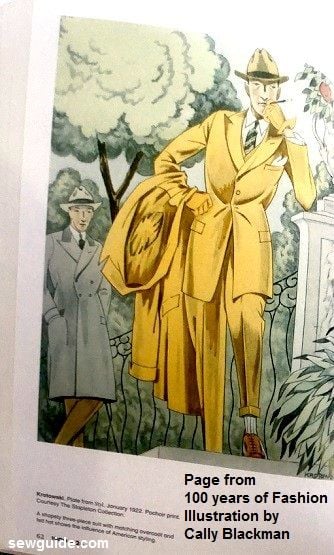 Paris based Gabrielle ‘Coco’ Chanel was the most fashion designer of the decade during the 1920s – she revolutionized fashion with her loose camisoles, straight skirts, pleated flared skirts and loose cardigans.  She envisioned the Little Black Dress as a simple and fashionable dress for all women. Her signature style of knee length skirt with a cardigan jacket was very popular among working women.

Cloche hat was the contribution of the French milliner Caroline Reboux. Three major fashion magazines with immense popularity were Vogue, The Queen, and Harper’s Bazaar.

This made stylish clothing affordable to all – even middle class.

As the economy boomed and jobs were filled by educated men and women, educational institutions proliferated and many new fashion designs were made targeting the youth in these campuses. The tastes of youth were given a lot of importance when conceiving designs. A slim, boyish figure was sought by young women.

A simple sporty lifestyle was coveted by all including women and easily wearable clothes were in demand. Trousers were worn by women for riding horses, and bathing suits became popular as swimwear.

Styles of sportsmen of the times like Swimmer Johnny Weissmuller, Tennis player Jean René Lacoste, Pilot Charles Lindbergh were followed by the fans.

It is said that the hemlines of women rose so that they could easily dance the Charleston dance, without the folds of cloth getting in the way.

Jazz was the music of the decade and the music of Louis Armstrong and Bill Johnson (of the Original Creole Jazz Band), and Duke Ellington had many followers. Long and tight fitting jackets and figure hugging trousers of the jazz musicians were popular among the jazz music fans. Jazz Musicians also popularized bold and baggy zoot zuits with fully cut coats with exaggerated shoulders and high waisted baggy pants tapering at the ankles and suspender belts.

The style of clothing in films and that of movie stars also influenced fashion. Styles of movie stars like Rudolph Valentino, Charlie Chaplin and Louise Brooks were followed blindly by fans.

Read more on the Jazz influence in the 1920s here.

The end of Word war saw the US emerging as a very strong global economy and the richest nation in the world. European nations suffered a lot during the war but they recovered during the decade and became prosperous again.

Paris was still the capital of fashion for women and London was central to men’s fashion. Magazines published from Paris like L’Art et la Mode brought Paris fashion trends to all over the world.  Fashion from other countries like Japan, ancient Egypt and other Asian countries brought about many fashion styles.

10 Rise of the Urban Middle class

Class society was almost abolished in Europe and America by the end of the war in 1919. The middle class now had higher income and larger spending habits than ever before and they wanted clothes which were practical and provided comfort. Women, who were working along with men, wore tailored suits. The simple styles of the times made the clothes affordable to all – they could buy clothes or even make these easy styles at home with their sewing machines.