This post explains what linen fabric is and lists the different types of linen fabric, what it is made of and the most important properties associated with the fabric. 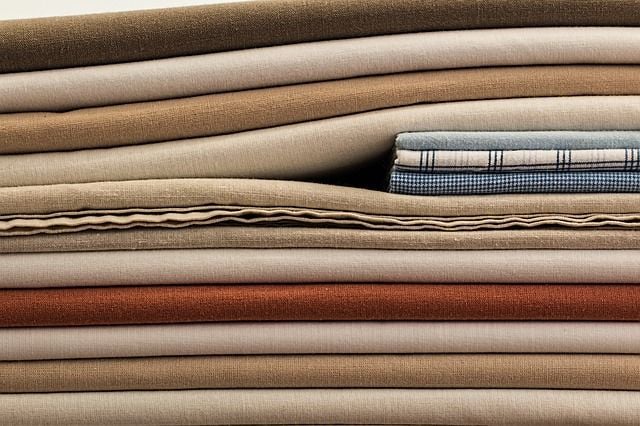 Linen is a strong fabric made from the fibers of the flax plant. The qualities of Linen fabric make it one of the most sought-after textiles in the world – for the last 30000 years and more.

What is Linen fabric made of?

Linen is made of flax fibers. Flax is an important cash crop plant which is much in demand for its seeds and fibers. It is an annual plant and just takes about 100 days to grow the flax plant to perfect condition to be harvested.

The plant has flowers which are violet, blue and white in color and rarely red, which blooms once in its lifetime. The fibrous material inside the stem of flax plant is used to make linen fibers hence linen is also called flax fabric.

The plant grows in cool, damp environments and is mostly grown in Europe. It cannot tolerate high heat. Russia, France and Belgium, China, Egypt, Northern Italy, and parts of Canada and the northern United States are the countries producing Flax plants.

What are the distinctive properties of Linen

What is Linen fabric used for ?

Linen is a versatile fabric in that it is suitable for making garments as well as for upholstery and home decor projects.

How is Linen produced ?

You can read more of this process in detail in this post – How is linen fabric made.

Why is Linen so expensive?

Flax is difficult to harvest. The full flax plant has to be uprooted, to keep the full length of the fibers which results in a fine yarn. Careful harvesting is necessary to ensure quality.

The process of making the textile is also long-winded and complex. Hence it is very costly to make linen fabric. This results in a very expensive linen material.

But most people do not mind the cost factor – because of the fine qualities of linen – easy elegance, summer readiness etc.

What is the most prominent advantage of Linen?

Linen is one of the most summer-ready fabrics; It is breathable and absorbent.

Linen fabric can absorb upto 20% of its weight in moisture before you can feel any dampness. This is because of its structure which soaks up water to its center. Because of this, linen is very much in demand as napkins and dish towels.

It also releases moisture to the air and remains dry. And it is a good fabric for summer weather – in moderate heat, your sweat will be absorbed, keeping you cool and comfortable.

What are the different types of Linen fabric?

Linen is categorized according to the weave of fibers. Linen is also nowadays blended with other fibers like cotton and wool.

You may also categorize Linen according to geographical regions where it is grown or processed- Irish Linen is the best and most valued. European linen comes next in quality. Scotch linen and German linen come next. Then there are Russian Linen and Chinese linen which are not considered at par with those in Europe.

It is a reversible textured linen fabric, originally from Damascus. It is woven on a jacquard loom. Damask looks very luxurious and is used mostly for table linen and draperies. Infact Damask Table linen is very much valued.

It is a fine linen fabric with a very close weave originally from Cambrai in northern France. It has a lustrous finish, a fine surface, and a great drape. It is great for all kinds of needlework especially cross stitch and shadow work.

It is a rough fabric, usually undyed, made with slubbed yarns, and is often used for towels, table linen, and draperies. The coarsest is called Russian Linen.

Obviously used for making bedsheets, this is a heavier linen.

It was earlier used for clothing and mummy wrappings for Pharaohs and members of the royal court in Ancient Egypt as early as 5000BC. (The Turin shroud is a linen cloth.) The name is now used for a heavy unbleached linen

This is the finest of all linen. It is very soft and semi-sheer. Perfect for making delicate handkerchiefs with embroidery and blouses and babywear

Linen-Lycra blend is very much appreciated because it mitigates one of the problems of linen fabric – its wrinkling (not fully but to a good degree).

How to buy Linen? Quality standards to look out for.

Linen is usually a very easy care fabric. It looks even better with age. It becomes softer with every wash. A little steam or a sprinkle of water while ironing can work wonders to remove wrinkles on linen.

How to sew with Linen ?

Sewing success is all about fabric choices. When you have a good fabric with you which is easy to sew you are guaranteed success. Checkout this post on How to buy fabric for sewing.

Linen is one of the best fabrics to sew with and clothes made with this fabric look beautiful as well. Designers love to design clothes in Linen. It is a favorite for making jackets, vests, and pants. Summer dresses in linen are very popular.

You can sew linen with any type of needle, and any type of thread. Just keep a steam iron close by as you sew. On a bias cut, linen fabric drapes very well.

As linen shrinks about 3-10% in the first few washes you may want to prewash linen fabric before cutting it up. Some people even prewash linen 4 times before sewing it to get that smooth finish.

Then iron when it is still slightly damp to remove the inevitable wrinkles on it. Press as you sew. Press seams open. You may need to finish the fabric edges as the linen frays. But if it is cut on the bias the edges would not fray

You can use a silk organza underlining for making clothes with linen.

Linen is one of the most popularly used cloth for embroidery. Cross stitch and other counted thread embroidery work like Black work embroidery can be done very well on this fabric because of the even weave of this cloth.

Hemstitching looks beautiful when done on linen. Because of its crisp nature, pintucks also look good on linen.

Check out this video which shows the weaving of linen

What causes the crispness of linen?

Linen has a natural protien called Pectin in its fibers that makes it crisp and stiff. But it can be removed by repeated washing.

What is Lea for linen yarns?

Lea is a measure for yarns (Yarn numbering system). It is the number of 300 yard lengths of yarn per pound.