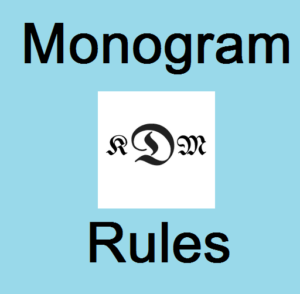 Monograms are basically initials of a person or one or more persons combined representing possession.  A monogram is a personal logo, the perfect way to represent a name and personalize the thing it is on. Monograms shout out to the world who the thing belongs to. It has been a sign of class and distinction for centuries. In weddings where monograms are most relevant, they indicate the joining of lives.

People use monogram for different reasons. Some do so that they can identify their things from other’s. Some do it as a means of giving a personal character to their possessions. Some want the distinction that monograms can give. When it comes to weddings, monograms are hot properties. Everything is mass produced nowadays – a monogram can set even the most common place thing apart from the rest

Embroidering letters is not the same as monogramming. Monogramming uses letters representing a name – the initials are used in different placements in the monogram. Checkout the post on making a monogram on your own and 4 simple and easy ways to add it to your fabric. 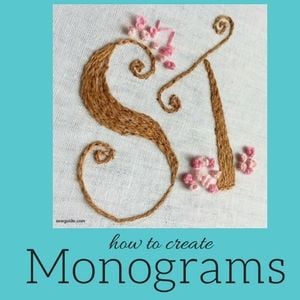 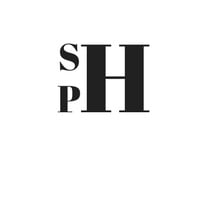 Checkout the post on embroidering letters for details on how you can design and create monograms or  this site for free monogram designs you can try out with your own names.

*For single woman First Name Middle Name & Last name order is used if all the letters are of the same size. It is when the second initial is bigger that the order First Name, Last Name & Middle Name used

** For Married Woman  the maiden name in her name which comes second when she was single is discarded and her family name initial takes the place . The last name will be that of her husband’s family name.This is strictly after marriage. So for wedding monograms this change is not done

What if you have a long Name?

If you have a 4-word name like Mel Gibson -Mel Colm-Cille Gerard Gibson and would all the initials to be there in the Monogram, you can line it as it is , say MCGG, or stack MC on top of GG

The size of monograms

The size of monograms is usually a personal choice. But the monograms you get embroidered professionally start from 1 inch to go up to 4 inches. For bigger projects, you can go bigger. It all depends on the proportion. For example on the pocket of our t-shirt you will get a design area of only 3.5 inch by 3.5 inch ( depending on the size). So the monogram should be well within that size.

To get the monogram size right you can print out the monogram you have in mind, ( all letters individually) and place it on the fabric to see how it looks .

If you are giving a soon to be married couple a gift with a monogram or designing your own wedding monogram , there are many options you can choose

To test out the correct placement of monogram you can print out the monogram, cut it out and keep it on the item and ensure that the placement is to your preference. Another important thing which I feel is important when choosing the placement is the ease of embroidering. You will need to stabilize and hoop the area to be monogrammed.

Monograms are usually placed on the left front of clothing. On shirts they are placed on the shirt cuffs and collars and on left forearm . Some jackets have them on the back and even on the lining.

Some common items and general guidelines of monogram placement on them are as follows.Measurements are from the bottom of the monogram They are mostly similar to the guidelines for embroidery placements . 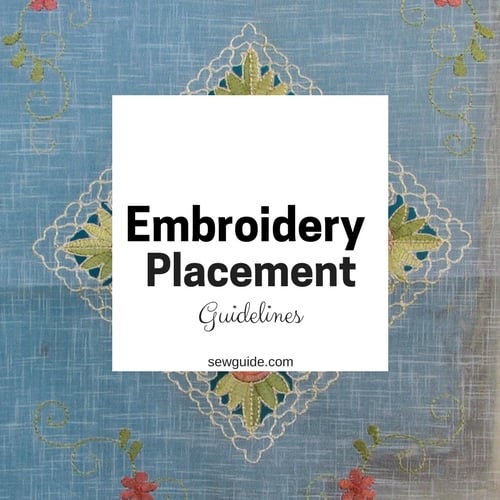 Hand towels – 2 inch above the hem

Bath towels – 4 inch above hem on the opposite side of the label; For bigger bath towels 9 inches are common

Pillowcases – Monograms are usually placed near the opening , centered. A 2.5 inch from the opening is normal. They can also be done centered on the pillow in bold letters ( size 10 inch)

Blankets – About 5 inch from the hem

Bed Sheets – Monograms are placed at the top of the sheet centered about 4 – 5 inch from the hem.

On Duvet covers and Coverlets Monograms are centered in the middle.

Checkout the post on the common bed sheet sizes.

On clothes, Monograms are usually placed on the left front area.

Men’s Shirts – It is usually placed on cuffs. You can place monograms near the chest area as well as on the pockets, near the hem or on the sleeve placket . Place the monogram 7 inch down from the collar and 4 inch from the center 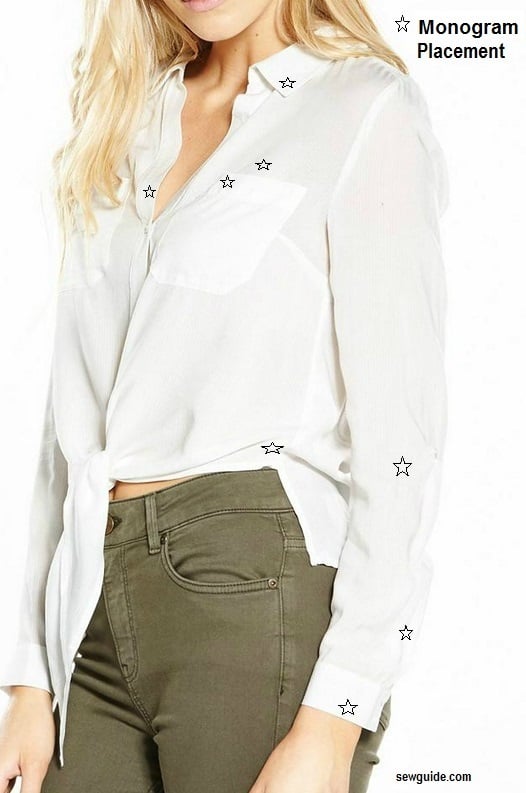 On Shirt cuffs (usually it is the left cuff) – Design the monogram 1/4 inch in size.

On pockets – 1/2 inch down from the center of the pocket or a few inches down from the top edge. Initials monogrammed on the tip of the collar is also gaining popularity, but it is too visible so it has to be done tastefully

Girl’s blouses – Place 4-6 inch down from the left shoulder seam  and 3 -5 inch from the center.

On the back of clothes – 6-9 inch from the collar

For children’s clothing, these measurements should be scaled down to their proportions.

On Napkins and placemats they can be placed about 2-3 inch from the edge on the corner.

There are some rules in monogramming which has been constant since the discovery of monograms but as I said nothing is written in stone. It is your preference and taste and the occasion that matters.Break the rules and create your own masterpiece.