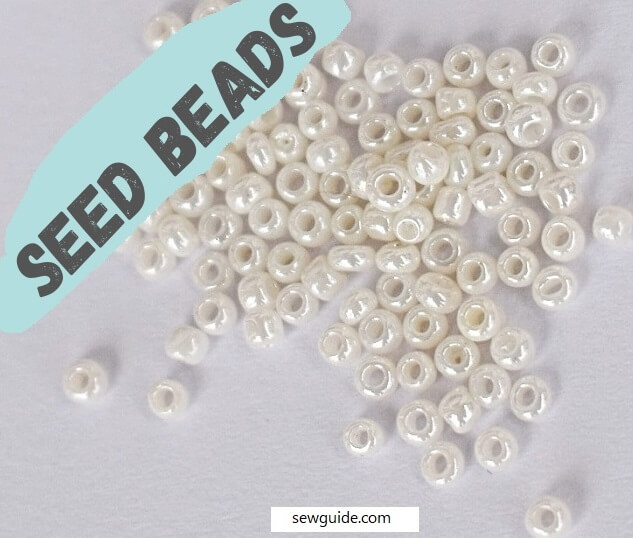 Small glass beads with small holes – that is what I would describe the seed beads as. These beads were once made as an inexpensive replacement for small natural pearls less than 2mm in diameter which were and still is called as seed pearls – that is how they got this name. Today they are widely used in beadwork, bead embroidery, to make jewelry, macrame work, fiber arts.

Another name for seed beads is Rocaille beads.

At one point in the history of mankind, seed beads were used as currency -it was a currency of exchange in Africa, America, and Europe. So you can imagine the importance that was given to seed beads.

Today, for us there are many other options in beads. And people are short of time and beadwork with small beads, despite their beauty, take a lot of time. So seed beads have lost the prominence that they earlier had. But still, the delicacy and intricacy of work that seed beads bring in beadwork is commendable and much appreciated.

Seed beads are available in many sizes, colors, and different finishes.

Seed beads according to their Finishes 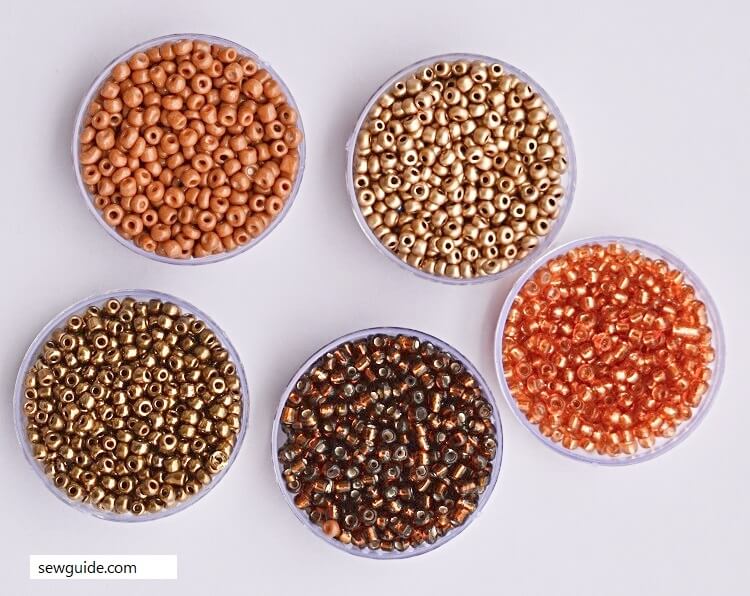 Seed beads can be categorized according to the finishes applied on their surface and also the hole. Here are some of the categories of seed beads as per their finishes.

Lustre finished beads – These beads will have a shiny lustrous finish.

Matt finished beads  – This is a finish that does not shine

Ceylon finished seed beads – This is a pearlescent seed bead (with a pearly luster) . It is usually made on a white bead

Lined hole seed beads – In this, the bead will have a colored or metallic coating in the hole which will stand out against the surface color or transparent look of the seed bead.

Most branded beads have a coating outside the beads to increase their durability. For eg. Miyuki beads have duracoat® coating.

Seed beads according to color

Translucent beads – somewhere in between opaque and transparent

Seed beads according to the size

Sugar beads – these are tiny seed beads about 1 to 1.5 millimeters thick.

Sizes of seed beads are mentioned in numbers. The number is said to refer to how many beads can be fitted in an inch. The sizes range from 22/0 to 1/0. The numbers are referred to as ‘number ought’ – for eg. 22/0 is mentioned as 22 aught.

8/0 to 15/0 are the most commonly used sizes in seed beads- bigger and smaller numbers are rare in the market. Out of these, 11/0 size seed beads are the most popular. The larger number represents the smaller-sized beads. So a 10/0 is bigger than an 11/0.

Though generally rocaille is referred as a general name for a seed bead originally a rocaille is said to be a transparent silver-lined seed bead with a square hole.

Seed beads according to where they are made

Seed beads are all beautiful but some are more beautiful than others due to their consistency and superior quality.

There are many problems with regualr seed beads – Some beads may fade, some may look different from each, some may have uneven and sometimes cut holes, some will wear off their finishes with some use. The most common problem with low-quality seed beads is that the sizes may not be uniform. This can result in the design becoming out of proportion. Even subtle size differences can make your beadwork look bad.

You will have to check that all the beads are of uniform size. If your bunch of seed beads (hanks) is not all of the same sizes you should pick similar sized ones for a particular area of the design to maintain the proportion; or buy the best quality one.

Seed beads made in particular countries are said to be superior to others.

Toho and Miyuki-Shoji are the most popular branded beads made in Japan. They are very much in demand because of their unmistakable quality – uniformity, colorfastness, brilliant colors, etc.

Related posts : How to make Beadtape on a wooden loom; 5 easy designs for beadwork on a loom; Bead embroidery stitches ; Beadwork tools and supplies; Different types of beadwork.