Morocco is a mountainous country in North Africa, bordering North Atlantic and the Mediterranean Sea and directly across the Strait of Gibraltar from Spain. It is the most westerly of North African countries.

The early settlers of Morocco were indigenous Berbers. However, the Phoenicians colonized the land between the 8 and 6 centuries BCE. From the 5th century to the 3rd century BCE, it was a part of the State of Carthage. Until the invasion of land by Romans in 40 CE, it was ruled by indigenous Berber monarchs. The region was conquered by Arab Muslims in the 8th century AD. Half a century later, Moroccan State was established by Idrisid Dynasty. Several dynasties ruled Morocco until it came under Alaouites Dynasty in 1667, and they have ruled Morocco since then.

Morocco’s culture is a blend of ethnic tradition and religion. It reflects Berber, Arab, African, Roman, European, and Jewish influence. Islam is the state religion, followed by Christianity. The majority of the population belongs to the Arabic ethnic group. The traditional clothing of Morocco is influenced by the Berber, Arab culture, and also the climate of the region. The proximity to the Sahara desert and coastlines leaves the country hot and humid with long summers.

The traditional clothing for Moroccan men and women is known as Djellaba. It is a long loose type of robe with long sleeves. They have a hood attached to them. The hood is called a qob. 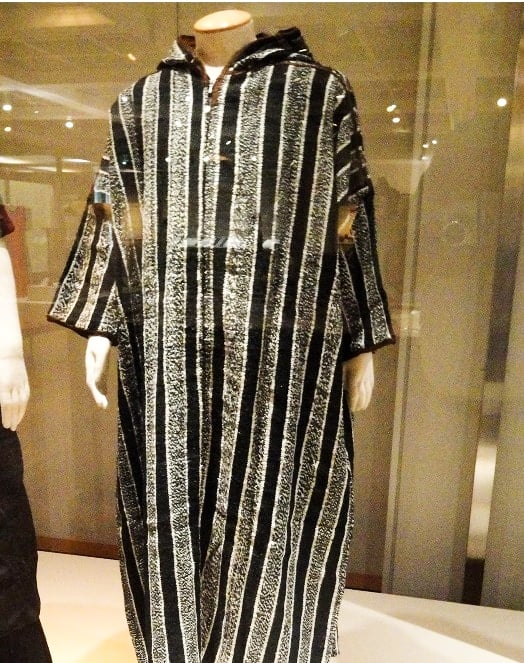 Men wear plain colored Djellaba. Women’s Djellaba is brightly colored and decorated with beads and other embellishments. Djellaba is worn as an outer dress. Initially, Djellaba was worn only by men. And it was made with wool. But later, men and women started wearing it. Also, cotton replaced wool. Djellaba is so versatile that it can be worn for all occasions.

A comfortable summer dress worn by both men and women is called Gandoura. 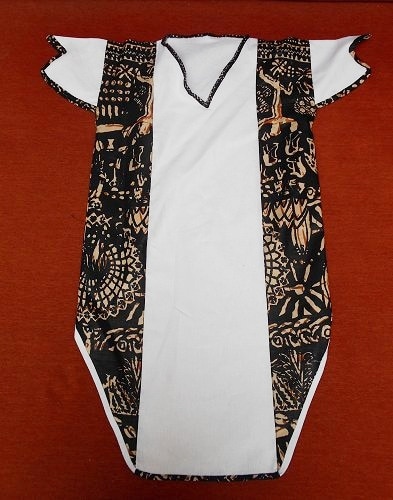 It is a loose dress with short sleeves and side pockets. Men’s Gandoura comes in plain colors, whereas women wear bright and colorful Gandoura. It is the traditional dress of Berbers.

In the Sahara regions of Morocco, men wear a different version of Gandoura called Deraa. It is a loose Gandoura that is open on the sides. This keeps the body ventilated in a hot and dry climate. 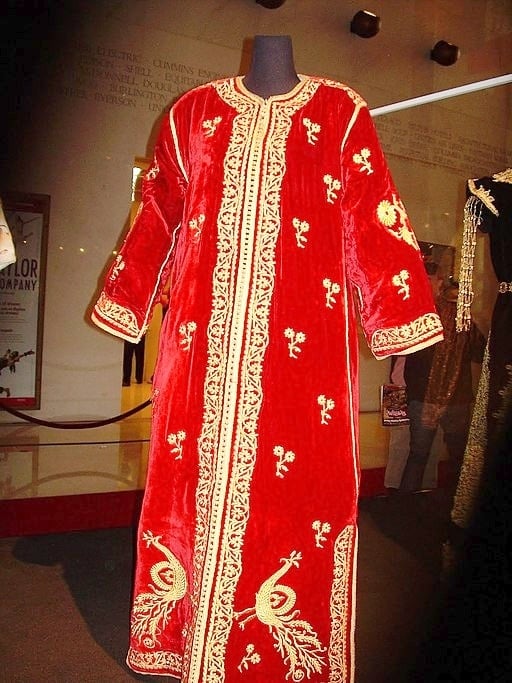 Kaftan may be the most popular of Moroccan clothes. It is a favorite with not only Moroccan women but women worldwide. Many international designers have included it in their collections for fashion shows.

Kaftan or Caftan is a traditional dress worn by Moroccan women. It is a single dress with or without full sleeves and reaches the ankles. The sleeves may be loose or fitted. In olden times, the kaftan was reserved for the royal family. But later, women from all social classes started to wear it.

Kaftan was first introduced to Morocco by the Muslims and Jews of Andalusia. The word kaftan means a single piece of dress. Kaftan can be worn for special occasions or as casual wear. They can be made of any material with elaborate and delicate details with gold or silver threads, embroidery, pearls, beads, etc.

Normally they are made of wool, cotton, silk, or velvet. Usually, after procuring the fabric, women visit Mosamima, the designer. Together they plan how it should look. After taking the measurements, the Mosamima will get ready in a few weeks. Thus kaftan is mostly customized by Moroccan women.

The outer layer, Dfina, is often made with ornately decorated fabric and adorned with embroidery, pearls, beads, and sequins. Dfina is clasped with sfifa and Akkad closures. Like Kaftan, Takchita was once reserved for members of royalty before it became accessible to all women. It is often worn for celebrations, especially weddings.

Haik is a full-body dress in white color. It is worn by women in some parts of Morocco, especially in cold or conservative areas. It is made of silk and wool. Haik covers the whole body of the wearer except the face and hands.

Moroccan men also wear loose baggy pants called Qandrissi. They adapted this style from Persia. It is a very comfortable and practical wear and comes in various colors.

Farajiya or Farasia is a type of dress made of diaphanous material and worn over kaftans made of silk or brocade. High-ranking members of the Moroccan elite usually wear it.

Djebba is a tunic or a rough shirt. It is a costume worn by Berbers.

Melhfa is a garment worn by women of Sahara. It is made of a large fabric of about 4 meters. It is a modest dress at the same time flowy and breezy. It protects women from blowing sands caused by strong winds. Normally Melhfa comes in blue or black colors. But nowadays women have started wearing other colors too.