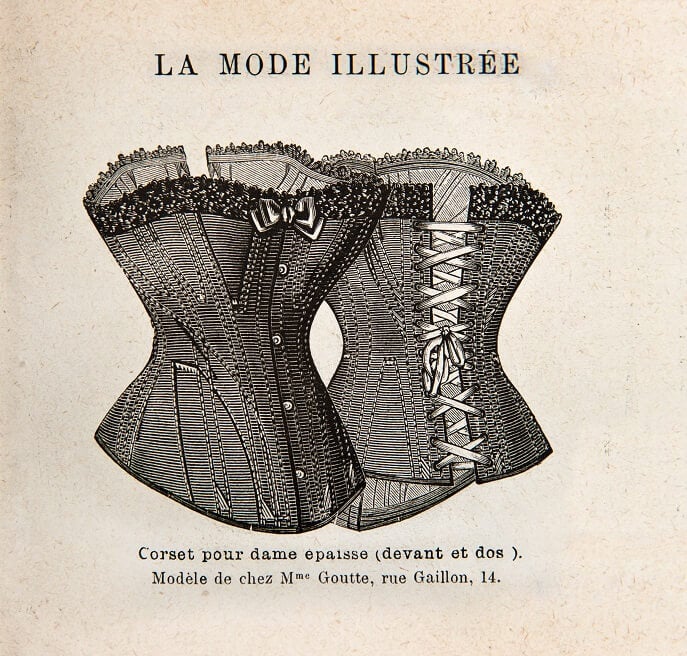 Women have always craved for and idealized the image of a small waist and a shapely figure and this craving is the story behind Corsets. This garment is supposed to alter the shape of a woman’s body to desirable proportions and to make the waist look thinner and longer. At one point in time, it was a compulsory undergarment that confirmed women’s bodies to societal standards.

Corsets have evolved and changed a lot through the years. Today, you cannot decide whether it is an undergarment or an overgarment and whether it is a support garment or a decorative one; for me, a woman’s choice over wearing it is the most important thing.

The history of the corset can be traced back to the Cretan period (3000 B.C. – 1400 B.C) when women are seen restricting their waist with heavy bands over the clothing. These waist bandages were used to create the illusion of slender waists.

There is a figurine from the Minoan civilization, dating back to around 1700–1450 BCE called the Minoan Snake Goddess seen in a very alluring dressing with bared chest and long tiered skirts; She seems to be wearing a corset-like garment that restricted the waist and left the breasts bare.

Ancient Greek women wore a draped tunic-like garment called chiton which was sometimes held at the waist with a girdle below the breasts or around the waist to keep the loose garment in shape – the band made of wool is supposed to be called  Zone.

Likewise, Ancient Egyptian women wore a tight narrow band under the bust to give support – Homer, the famous Egyptian poet talks about the girdle used by the goddess Venus.

Medieval women in Europe were modestly clad from neck to toe in loose-fitting tunics. It was considered a shame to even talk about underwear for women. But during the same period, there was a unisex garment called Cotehardie in medieval France – this is a tight-fitting over garment that buttoned down the front, and ended over the hips or till the floor. It had tight buttoned sleeves.  It was worn by men and women

Geoffrey Chaucer, the 14th-century English poet and author, has written about ladies in the court wearing a Kirtle over their dresses. Then there were bodies or stays – all stiffened upper garments- precursors to the corsets.

The name corset is said to be derived from the French term Corps, a garment that was used to flatten the stomach and highlight the fullness of the bosom and skirts. Corps were worn both as undergarments and overgarments.

In the court of French Queen Catherine de Medici(1547-1559) women’s position in court correlated to their waist size- she even went as far as to ban thick waists in her court. A light steel framework to constrain the women’s waist size was introduced in the French court. This was copied by other courts of Europe including Queen Elizabeth’s.

The Elizabethan bodice or stay was less rigid and used whalebone to give shape to the waist. These bodices were often worn with farthingale. The farthingale was a hooped petticoat or circular pad of fabric tied around the hips to hold out the skirts. Paired with the bodice, it gave women’s torso an inverted conical shape. About this time, the bodice and skirt got separated.

The bodice was patterned to be very tight and straight which required a heavy underbodice. This underbodice was laced very tight to obtain the required silhouette. The underbodice can be called a pre-runner to corsets. It was made of linen stiffened with paste. A primitive busk was used to give support. The busk was used to make the center part of the corset rigid. It was made of ivory, silk, wood, or whalebone. The bodice was tied with lace at the front or back. The eyelets for the laces were made by putting holes in the garment which were strengthened by buttonhole stitching. Soon, the bodice started to appear like an over garment as it became more elaborate and beautifully decorated. For bodices that were laced at the front, a separate decorated panel made of a fabric called stomacher was attached to conceal the lacing part.

During the eighteenth century, the corsets were used not only to slim the waist and raise the chest and make the waist longer but also to give support to the back. The shoulder straps were added so that a woman could stand upright with her shoulders thrown back. The neckline of the corsets was either high or very low as it was considered to be a thing of beauty to expose the breasts during this time. Lacing became a very decorative feature of the corset and they were often decorated with gold trims or silk brocades.

Figure training started early in the life of women – their budding bodies were fitted with child corsets to confirm their body to societal specifications. Starving and tight lacing were common procedures in the life of most women. Some even wore the corsets when sleeping.

The term ‘corset’ as we know it today was first used during the nineteenth century.

The beginning of the nineteenth century witnessed European women adopting the Greek and Roman style fashion. The dresses with high-waisted empire style demanded short corsets. The primary objective of these short corsets was to support the breasts. Also, they became less restrictive as the empire-style gowns preferred a natural waist.

But the empire style soon went out of fashion ushering in the Victorian period which clearly emphasized the small waist.The corsets gave the women a typical rigid hourglass figure which suited the high-waisted, long flowing dresses. The corsets did not end at the hips. They flared out and ended several inches below the waist giving the illusion of a narrower waist. 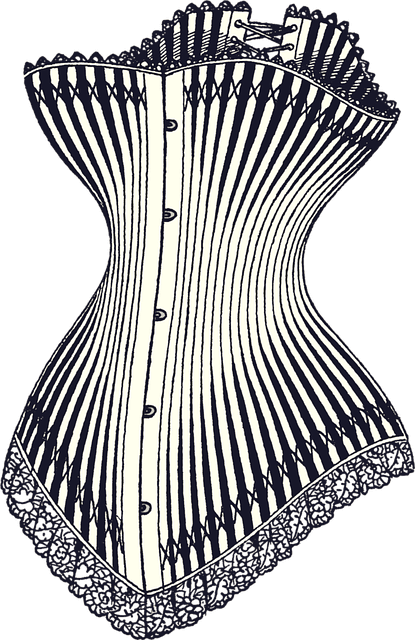 During this time metallic eyelets were invented. These allowed tighter lacing which became very popular. Along with metallic eyelets, a different type of corset called Minet back was introduced. In this particular corset, there were loops on each side of the back through which strong whalebone was inserted. The lace was passed through the loops and tied to the bar. Towards the end of the nineteenth century, corsets with hooks and eye clasps were introduced which allowed the women to wear corsets without any outside help. The corsets were made either on a loom or on a machine. Since there was a scarcity of whalebone, steel was also used to give shape to corsets.

Some corsets during this period were as long as the upper thighs which created a slender silhouette for the whole body but this restricted their movements. 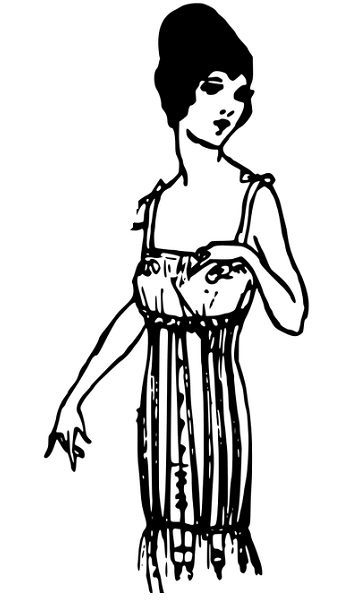 For women engaged in outdoor activities like bicycling, tennis, golf, or horseback, corsets that were less rigid were introduced. They had less boning and were knitted to allow ease of movement.

There was a beginning of awareness about the ill effects of the tight lacing. The late nineteenth century witnessed a movement against tight lacing of the corsets to achieve a beautiful figure. The doctors, dress reformists, and journalists clamored against women putting beauty before their health. They stressed the ill effects of tight lacing on the female body. Though corsets were believed to provide support for a straight posture for women, tight lacing often had an adverse effect on their health. It was common for women to faint during this time. Doctors said tight corsets would affect their internal organs and would have an adverse effect on their child-bearing abilities. The women activists were demanding more sensible clothing which allowed freedom of movement and fewer constraints.

The Edwardian era (1901–1910) saw the introduction of an S bend corset or straight front corset. 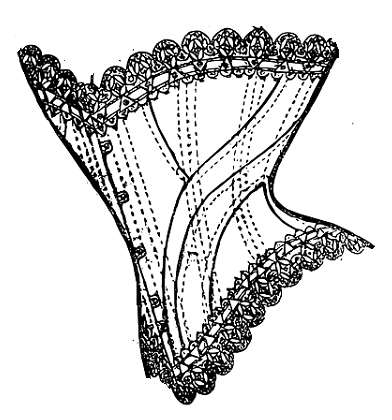 This type of corset had a very rigid and straight busk inserted in the center of the front side. This gave an S shape by forcing the torso forward and making the hips protrude at the back. S bend corset did not put too much strain on the stomach area. However, it created problems for the back with its unnatural posture.

The shape of the corset again changed during the 1910s. Narrow skirts with a high waistline and a large bust were in fashion. Therefore the new corsets extended over the hips and reached below the bust line to accentuate the breasts.

Soon, corsets began to fall out of fashion. After World War I, women tended to wear loose simpler dresses. Also, brassieres have become popular by this time which also added to the decline in need of the corsets. The brassieres can be considered as a short form of corset because they supported the bust. But it did not confine the waist. For shapewear, the women chose separate brassieres and girdles instead of corsets.

Corsets have made a spectacular comeback in the modern fashion world. Many designers were attracted by the lacing-up feature of the corset. It is used as an Vivienne Westwood was one of the designers who embraced a corset. Her corset was styled like the eighteenth-century stays. They were made of lightweight plastic and had a zip instead of of the lacing fastener. One example is the famous lace-up satin corset with projectile breasts made for Madonna by the famous French designer Jean-Paul Gautier.

The 1990s saw the emergence of corsets as both innerwear and outerwear. Nowadays corsets are available as ready-made or custom-made – all meant to create a graceful figure. They can be made of elastic material to accommodate figure differences. They have become a part of contemporary fashion. It continues to make a women’s body look younger and more appealing by emphasizing a fuller breasts and hips by making the waist look slimmer.

If you are interested to read more on corsets and their history this book is valuable: The Corset and the Crinoline: An Illustrated History By W. B. Lord

Updated on September 9, 2022 by Sarina Tariq