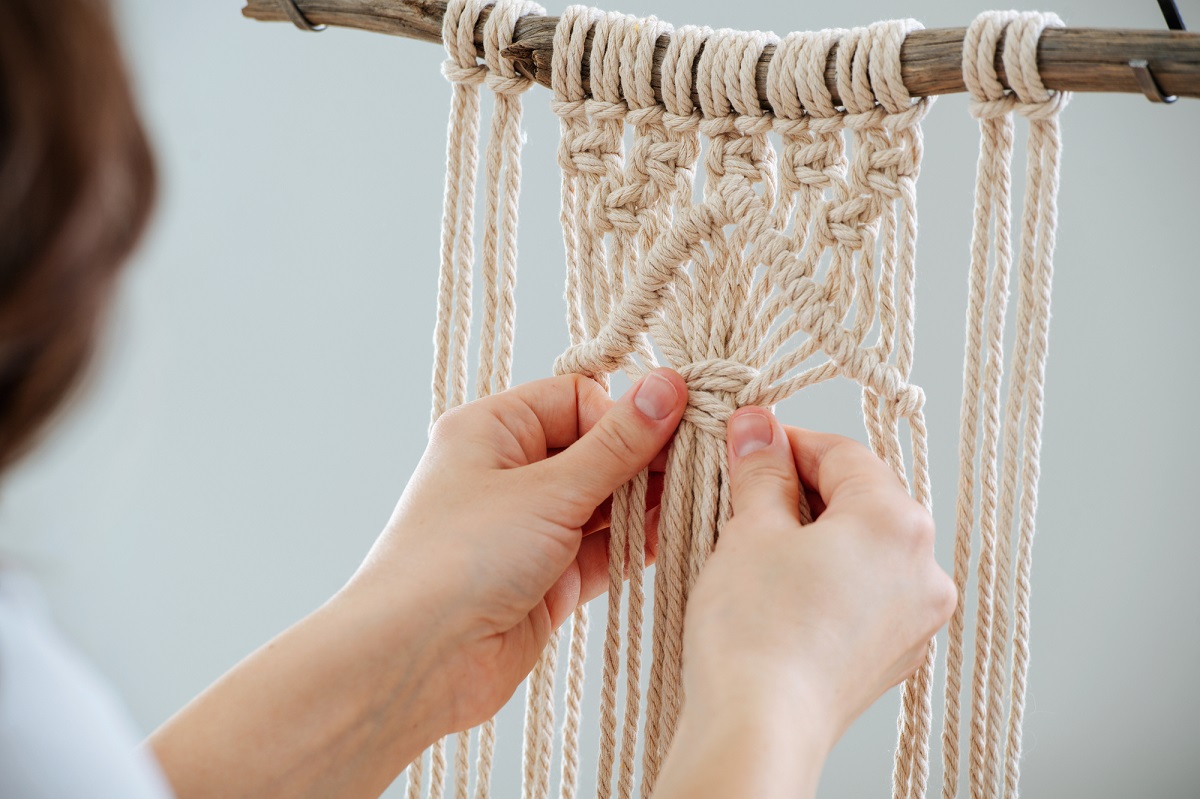 When you browse through any social media platform feed, you will come across scores of reels and posts displaying beautiful wall hangings, bags, mirrors, lampshades, keychains made of ropes/cords with a rustic charm. This craft has a fancy name – Macramé.

Macrame is the art of ornamental knotting for creating various crafts and textiles using ropes and cords. It is similar to weaving or knitting in that you can create fabric by yourself with threads. The only difference is that everything you see in macramé is made by the repetitive use of some basic knots.

It can be used to make ornamental lace if you use fine thread. You can make many projects using macrame – potholders, wall hangings, tablemats, even fine jewelry. 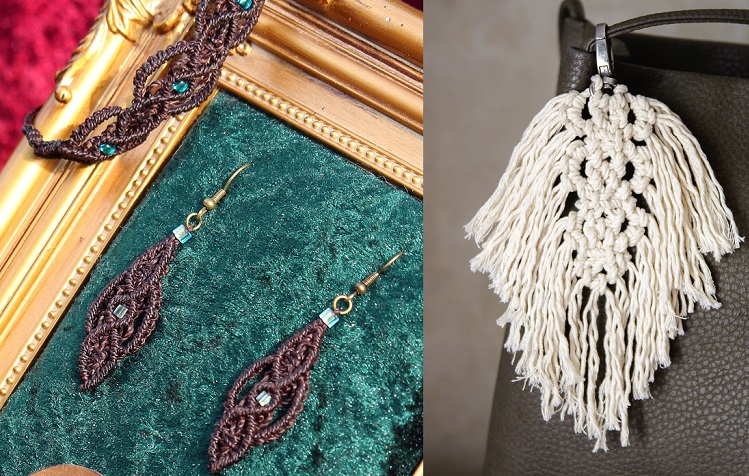 This art form has gained popularity these days, much thanks to social media and the love of people to make things by hand.

The finished artwork can seem very complex and difficult to make. But in reality, it’s easy to make once you master the basic knots. If you are new to macramé, let me share with you some interesting facts about Macrame and the basics needed to learn this beautiful craft

Though Macramé is very popular nowadays, it is not a product of the 21st century. Knotting ropes were known to man from a long long time. In fact, the carvings found in the Babylonians and Assyrians period depict on their costumes fringe like plaiting or braiding.

Some say it dates back even further. They say macramé might have origins in China. In the 3rd century BC, the Chinese have used a particular knot called Pan Chang knot to create infinity symbols, lanterns, hangings, and ceremonial garments.

In the 13th century, Arab weavers used various decorative knots to finish the excess thread on their shawls, veils, and towels to create a decorative edge.

In Northern Africa, decorative fringes were used on horses and camels to ward off the flies. In their conquests, the Moors brought the art of macrame to Spain. From Spain, it traveled to Italy and France, from where it proliferated to entire Europe.

British sailors also had a huge part in spreading the techniques of macramé to various parts of the world. Knots and sailors go way back. They were familiar with tying knots in their day-to-day task. They used macramé to decorate their ships, knife handles, to make belts and hammocks. It provided them with an interesting way to relieve their boredom. Not only that, when the ships docked in various ports, these sailors would sell or barter their handicrafts. They took macramé to various parts of Europe, and America.

Macramé gained great popularity in England during the Victorian era. Queen Mary II of England was a great fan of this art. In fact, it is said that she saw to it that her ladies-in-waiting learn the art. Most English households had pieces of macramé in the form of wall hangings, table cloths, bedspreads, or curtains. They also used it to adorn their clothes. Queen Charlotte had her beautiful macramé handiwork decorating the royal residence. With the introduction of sewing machines during the Industrial Revolution, the demand for macramé slowly died down.

The macramé resurged in the 17th century in the hippie movement. It became part of the Bohemian culture. There were macramé wall hangings, plant hangers, table cloths, bedspreads, curtains, dream catchers, furnishings, clothing accessories, and even jewelry.

Macramé jewelry was very popular in America. They would add glass or wooden beads, stones, feathers, or pieces of bones to make them more decorative. Earrings, necklaces, bracelets, and anklets were some of the popular jewelry. By the 1980s, macramé again fell out of fashion.

But thanks to social media, macramé has been revived by creative crafters. Nowadays, it is easy to learn macramé through pattern books, articles, DIY kits, videos, and online tutorials.

What are the supplies needed for macramé? 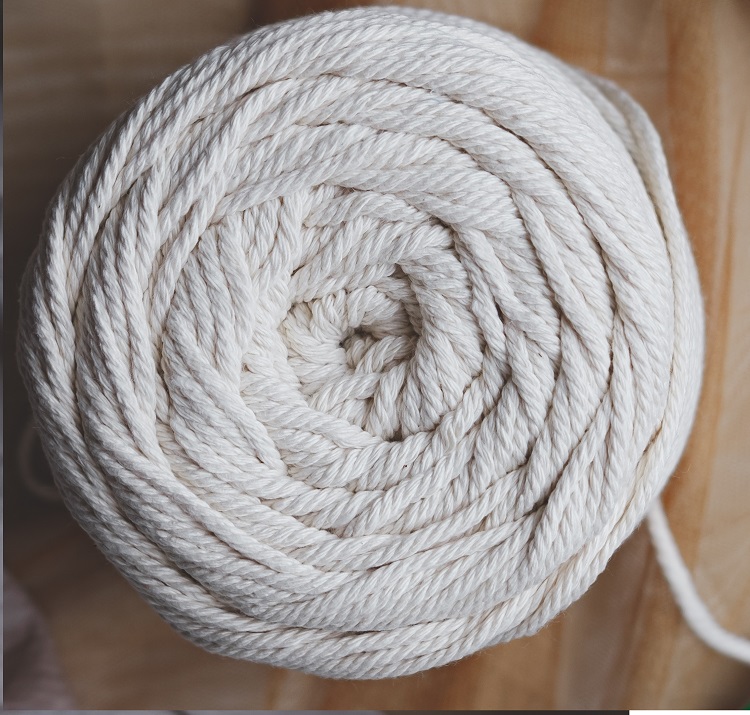 You can start doing Macrame with nothing but some pieces of cord. Macrame Cords are available in different colors as well as different thicknesses. The main criteria in selecting cords are that it doesnot stretch and there is enough for the project (the knotting takes up a lot of the cord) and it is evenly textured.

Related post: Best material {cords} to use for Macrame.; How much cord is needed for a macrame project

The next important thing you need is a pair of good sharp scissors. Invest in a pair of a very good premium scissors – it makes your macrame work fun in the long run; less strain on the fingers and clean cuts

Professionals use a knotting board – this board is used as surface for making the macrame knots. It will have a rod on the top to hang the ropes. The board is soft enought that you can pin on to them. It can have marks to make accurate evenly spaced knots.

If you do not have this board you need wooden or metal rods or dowels and rings to hold your work. For example, a wall hanging can be hung from a dowel or stick and a plant hanger can be hung from a ring. If you are making a shelf, that would require wooden planks.

Similarly, certain types of bags would require handles and clasps. Macramé keychains would need metal clasps to attach your keys. You can use wooden or glass beads, feathers, and the like to decorate your piece of macramé.

How to do Macrame? The basics

Is it easy to learn macramé? The answer is yes. 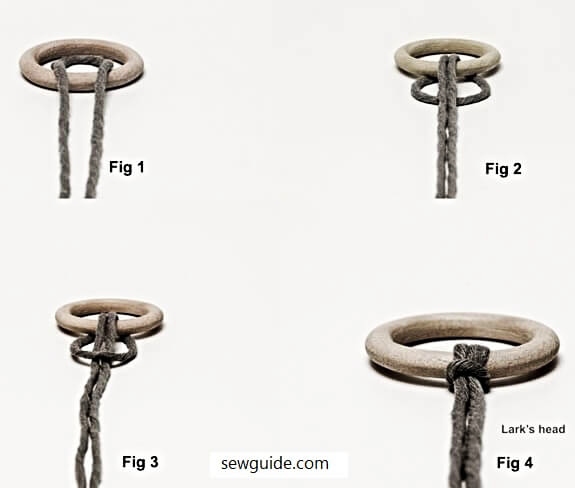 It’s an easy knot with which you attach cords to a ring, string or a stick/dowel.Most macramé works are attached to a dowel or ring or hoop using lark’s head knot or reverse lark’s head knot.
A single cord is folded in half and the looped part is placed over the dowel or ring to attach the cord 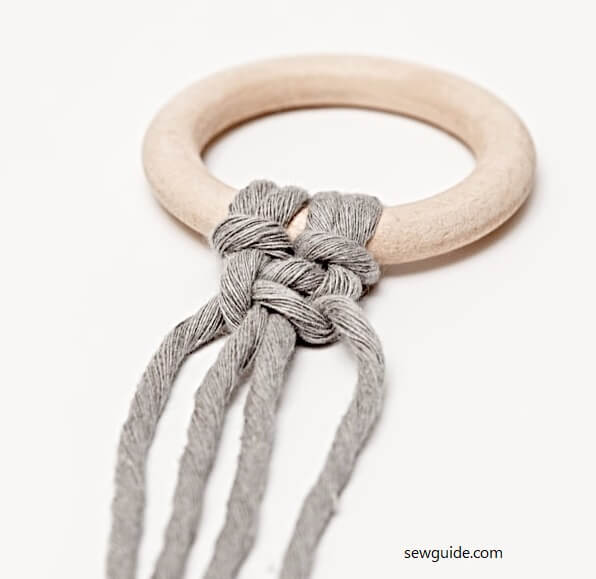 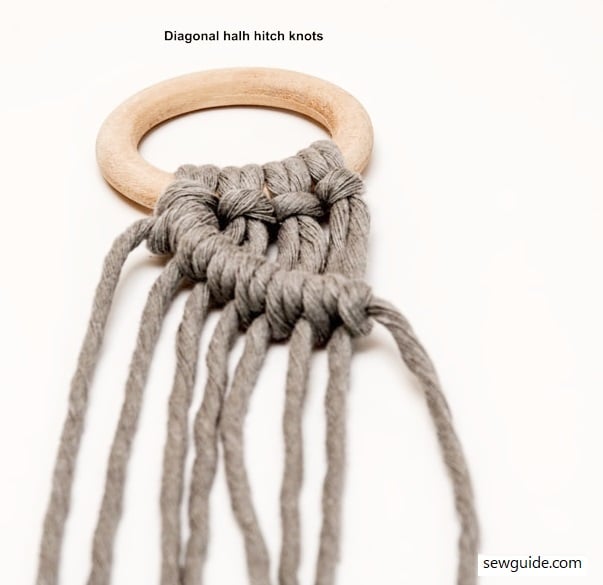 Half hitch knots can be done in a straight line or diagonally as the design demands it.

Once you master these three knots, you can master all kinds of Macrame projects both small and big.

Hi,
I love sewing, fabric, fashion, embroidery, doing easy DIY projects and then writing about them. Hope you have fun learning from sewguide as much as I do. If you find any mistakes here, please point it out in the comments.